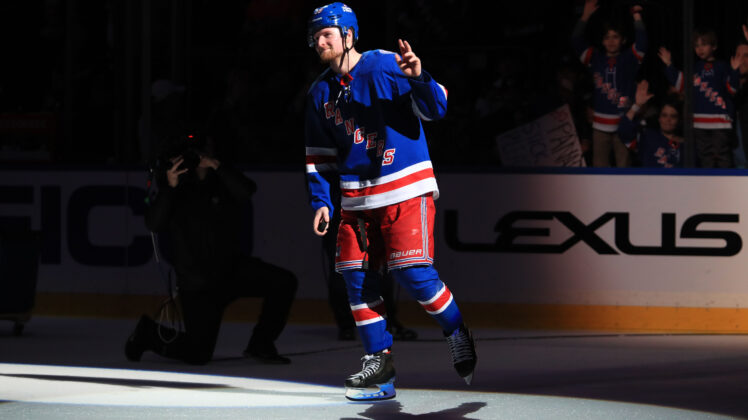 Alexis Lafreniere scored twice in a game for the first time in his NHL career on Saturday. Coming off a healthy scratch and facing the Detroit Red Wings, he slipped a through-the-legs deke on Dylan Larkin, went wide and roofed a backhand over a lunging Thomas Greiss.

Frank Vatrano, who got a great look at the goal was impressed.

“It was one of those where you kind of tip your hat and say ‘what a goal’,” Vatrano said. “I had a front row seat to it. Pretty goal. Special player.”

It’s been a great season for the second-year player. After scoring his second goal, he brought his stats up to 17 goals and 27 points in 73 games while averaging just 13:54 per game (very little power play time).

Prior to the contest, Alexis was scratched by the New York Rangers with head coach Gerard Gallant providing the team’s decision as to why.

“I made a decision the other night to rest Laffy. Not because he’s played bad hockey,” he explained. “He’s young kid but we look at that stats and we’ve got medical people testing him every day. You take advice from people and that’s what happened.”

After the two goal performance, including probably the best goal in his early NHL career, Gallant had some jokes about the scratch.

“Good idea,” he laughed afterwards. “He looked like he was refreshed tonight. It was good to see and sometimes it works perfectly and tonight was perfect.”

Lafreniere, who is mature beyond his years not only took the scratch in stride but was understanding of it.

“I felt pretty good,” he said. “It was fine. [Gallant] told me that he wanted to rest me and I wasn’t playing my best hockey before (Detroit). I got to rest and I felt good (Saturday).”

“I feel like I’ve seen that all year from him– the way he responds to different situations,” Mika Zibanejad said. “Everyone can see his skill on the offensive plays and the goal he scored (on Saturday). I think the work away from the puck is coming a little more consistent and getting better every single day.”

The New York Rangers climb up the standings have also improved their Stanley Cup odds again.

In the span of several weeks their Stanley Cup odds have gone from a +1800 to +1600 per Vegas Insider. That has them tied for 7th with the Boston Bruins, although I’m not sure I agree with that.

As far as where they rank in the Eastern Conference, they are tied for third at +800. Again, I disagree but those final odds are likely to change before the season ends.

Per the website MoneyPuck, the Rangers only have a .5% of winning the Cup. Hmmm.

The New York Islanders loss to the Toronto Maple Leafs eliminated them from the playoffs and gave the Washington Capitals the 8th and final spot in the East. Plus the Minnesota Wild clinch and all the games recapped. Read more.