Rangers and their dads look to keep it going in Nashville

The New York Rangers and their dads had a rip-roaring time in Detroit as the team exploded for 8 goals, including 6 in the third period for a big 8-2 win over the Red Wings.

“We wanted to have a happy plane ride with them,” Adam Fox said. “None of us would be here without them and the sacrifices they made. It’s cool for them to experience a little bit of what we go through. Hopefully we get another win with them.”

The Rangers have struggled this season but are a solid road team with a 4-2-0 record and seeking a fourth straight victory away from the Garden in Nashville on Saturday.

New York opened the season with three wins in four games, then went four without a victory (0-2-2). They bounced back to win three in succession before enduring an 0-2-1 stretch that ended Thursday with a resounding 8-2 victory at Detroit.

Star defenseman Adam Fox had a goal with three assists, Barclay Goodrow added one with two helpers and Mika Zibanejad scored twice for New York in their last match.

“It’s a special time when [they dads] can join us on a trip,” Goodrow said. “They’re a big reason why we’re all in this position and doing what we love for a living. To have a game like that, a period like that it was great. We’re looking to carry that into Nashville.”

The Rangers’ eight goals at Detroit matched their total from the previous four games, all of which were played at home, where they are have won just three of nine results (3-3-3).

In their current three-game road winning streak, they own a 17-7 goal-advantage and are 4-for-11 on the power play.

“I’m not sure we changed anything in the third period (Thursday),” said Zibanejad, who has five goals and five assists during a seven-game point streak.

“We had some really good chances that didn’t go in, but we didn’t get frustrated. We stayed focused. Because we know if we keep playing that way we’ll score goals.”

Meanwhile, reigning Vezina Trophy winner Igor Shesterkin is 4-0-0 with a 2.51 GAA on the road for the Rangers this season. However, backup Jaroslav Halak has a 3.48 goals-against average while losing all four of his 2022-23 starts.

Head coach Gerard Gallant will speak with the media after the morning skate scheduled for 11:30 AM ET.

The Rangers have won their past three trips to Nashville, where the Predators are 2-3-1 this season.

Nashville returns home following its 2-3-0 road stretch that concluded with a 5-1 loss at Seattle on Tuesday and Thursday’s 5-3 defeat to Colorado. The Predators allowed four Avalanche goals during a game-changing second period.

“Everybody’s got to step up,” said star Nashville defenseman Roman Josi, who scored his third goal of the season Thursday. “We’ve got to find a way to play better consistently, and it starts with each guy individually. We’ve all got to look in the mirror and just be better.”

Nashville’s Juuse Saros won a career-high 38 games in goal last season but has just three victories this season. He has allowed 13 goals in three November starts, including four on six shots faced before being pulled at Seattle this week.

Saros, though, has a 2.02 goals-against average in seven career starts against the Rangers following a 32-save performance in his last appearance against them — Nashville’s 1-0 win at Madison Square Garden last Dec. 12.

Filip Forsberg leads Nashville with 14 points on the season, and three goals and with four assists in five November games. 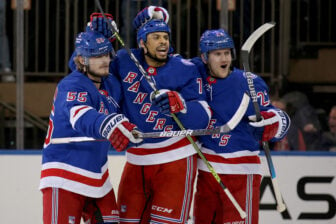