Rangers lucked out with Ben Harpur, is he in line for an extension?

Ben Harpur has taken advantage of his opportunity to earn a role as the sixth defenseman on the New York Rangers blue line.

The big defender has been able to do what Libor Hajek and Zac Jones struggled to do. And that’s grab the reins as Braden Schneider’s partner on the third pair.

Things didn’t look promising for the soon to be 28 year-old (January 12). He finished last season appearing in just 19 games for the Nashville Predators and was let go. He then was looking for a place to play in the offseason.

Harpur ended up signing a Professional Tryout contract (PTO) with the Columbus Blue Jackets despite speaking with the Rangers. When that opportunity didn’t pan out, Chris Drury and the Rangers reached out again and he signed his second PTO in two months.

“It was a hard summer. I finished in Nashville and knew I wasn’t going to re-sign there. I talked to a few teams early on, kind of just a waiting game and nothing ended up coming of that.” Harpour went on to say, “I remember, I think it was like a week before training camps opened, and I still didn’t have a deal. I talked to a couple teams and New York was actually one of them. Ended up picking Columbus, I just felt like there was an opportunity there for my style of game. It seemed like they were very interested, so I ended up choosing Columbus as my spot on a PTO. I played one preseason game and got hurt. Sat there for three weeks, just kind of staring at the walls of my hotel room. Then I got cut, went back home and New York called me maybe like two days later.”

Ben Harpur has earned his spot

Harpur played in 17 games for the Hartford Wolf Pack in the AHL before being called up to the big club on December 3rd. He was paired with Schenider and they became a reliable duo on defense. The consistency head coach Gerard Gallant was desperately looking for all season was found with the balance of a seven-year veteran matched with a second-year player, who just competed in his 82nd career NHL game on Tuesday night.

To date, Harpur has played in nine straight games, something both Hajek and Jones were unable to do throughout this season. He has recorded two assists, but more importantly, he has been able to give the top four defensemen a little bit of a rest as he is averaging over 13 minutes of ice time per game.

“Steady, steady, steady,” Gallant remarked. Harpur has earned his coach’s trust thanks to his size and style. “Comes up, he’s a big-bodied guy with a good stick and he’s played really well.”

The Rangers will see the halfway mark of the season early next week. They currently sit third in the Metropolitan Division with 48 points, which has them tied with the Washington Capitals (Rangers have played one less game).

With a majority of the games remaining this season having serious playoff implications, Harpur will be leaned upon to continue playing solid hockey.

It may still be very early, but Harpur’s efforts are reflective of another PTO candidate that just earned a two-year extension.

The Rangers announced a new deal for Jimmy Vesey with an AAV of $800,000. It’s totally plausible that Harpur could be in line for an extension himself for around the same money.

Not bad considering the offseason he had turning a previous snub to sign with Columbus into an improbable relationship with the Rangers. A team that is looking to make the playoffs and give youngster Braden Schneider some stability.

At this time, Ben Harpur appears to be the left defenseman the organization has been seeking for quite some time. A steady partner for Schneider, and a potential key piece for another successful playoff run. 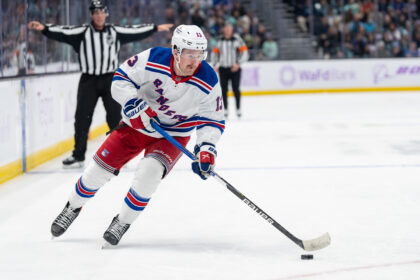