“Predictably, there were teams that checked in with the Rangers last week after his healthy scratch,” LeBrun said. “The reality is the Rangers told those teams, ‘We still believe in this young man,’ and the Rangers have told the same to Lafreniere himself. They hope this is a good reset and they very much believe in his longterm potential. So for now he’s certainly a Ranger.”

Forever Blueshirts indicated as much yesterday when discussing the latest speculation here.

Much ado about nothing was made when head coach Gerard Gallant scratched Lafreniere on December 29th in a 2-1 shootout loss to the Tampa Bay Lightning.

“It’s part of being a young man,” Gallant said of his decision. “He’s 21 years-old and played parts of three years in the league obviously with COVID. It’s part of the game. Kaapo (Kakko) has sat out games before and people sit out games. It’s not a big deal.”

Of course, that caused rampant speculation among some hockey writers which was only increased by several teams making calls about the 2020 first overall pick.

One of those teams apparently were the Vancouver Canucks, whose assistant GM Emilie Constanguay was Alexis’ former agent before taking the job.

“The Canucks have checked in on Lafrenière, he was made a healthy scratch last week by the Rangers,” Rick Dhaliwal tweeted. “Lafrenière will not be cheap but the Canucks have the assets like Bo Horvat to pull this off, if the Rangers decide to move him.”

There’s no doubt that the rumor mill is working overtime because Lafreniere is set to be a restricted free agent at the end of the season. But, it would take a lot for the Rangers to give up on a cost controlled asset when they are up against the cap.

Lafreniere returned to the lineup in a 5-3 win against the Florida Panthers on January 1 and finished the game with 1 shot, 1 block, and a -1 rating. However, his teammates recognized his hard-working efforts and awarded him the Broadway Hat as player of the game.

This season, he’s posted 17 points in 37 games with the Rangers in action against the Carolina Hurricanes as of this publishing. 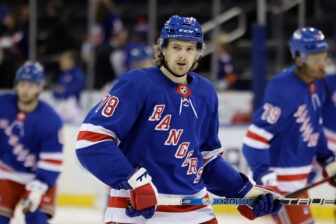