New York Rangers forward Alexis Lafrenière is at the center of the latest trade speculation thanks to a healthy scratch on December 29 against the Lightning. One that he earned with lackluster play in recent games.

Of course, when you are the first overall pick in the 2020 Draft and being scratched in your third NHL season, it’s going to raise eyebrows. Apparently, one of those eyebrows belongs to the Vancouver Canucks.

“The Canucks have checked in on Lafrenière, he was made a healthy scratch last week by the Rangers,” Rick Dhaliwal tweeted. “Lafrenière will not be cheap but the Canucks have the assets like Bo Horvat to pull this off, if the Rangers decide to move him.”

This season, the 21 year-old has 17 points in 37 games and is loaded with talent.

Now here’s the lowdown, trading Lafrenière for a rental would be a disaster for GM Chris Drury and the entire Rangers organization. The fanbase would revolt and likely cost Drury his job at some point. Maybe if Lafrenière publicly asked for a trade it could be a possibility.

Another potential destination being discussed is Montreal. Is anyone shocked? The Canadiens want a French speaking Quebec native? No way!

Despite the already small chance of the Rangers trading Lafreniere at this point, the last place Drury is going to move him to is Montreal. That’s where Jeff Gorton, the man he replaced, is running the show.

Imagine seeing Lafrenière develop into a 100 point player under the GM that drafted him? Anyone that questioned the move to fire President John Davidson and GM Jeff Gorton (there were plenty) will come out of the woodwork to remind Rangers fans about that decision.

Recent reporting from many that cover the Rangers indicates Lafrenière isn’t performing to expectations. Some scouts have mentioned his skating being an issue and one source told me that conditioning is also a concern.

Bottom line, no one was talking about Lafrenière as trade bait until this scratch. If you listen to head coach Gerard Gallant, everyone is making much ado about nothing.

“It’s part of being a young man,” Gallant explained. “He’s 21 years-old and played parts of three years in the league obviously with COVID. It’s part of the game. Kaapo (Kakko) has sat out games before and people sit out games. It’s not a big deal.” 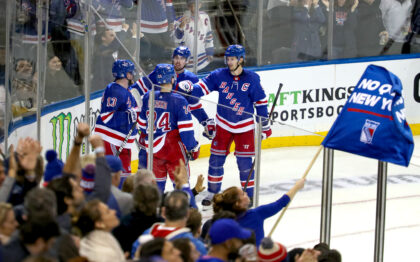 Note: This article originally appeared at The Daily Goal Horn