Alexis Lafreniere was back at practice on Saturday and skating a regular turn on the third line with Filip Chytil and Jimmy Vesey.

After being a healthy scratch for the New York Rangers 2-1 shootout loss to the Tampa Bay Lightning, Lafreniere will be inserted back into the lineup for Sunday’s clash with the struggling Florida Panthers.

“It’s part of being a young man,” Gerard Gallant explained. “He’s 21 years-old and played parts of three years in the league obviously with COVID. It’s part of the game. Kaapo (Kakko) has sat out games before and people sit out games. It’s not a big deal.”

The Rangers are getting ready to play their first game of 2023 with the hopes of finding the compete level that won 7 in a row and 8 of their last 9 before the Christmas Break.

With Lafreniere reinserted back into the lineup, it’s expected that Sammy Blais will be scratched again. When asked by reporters what he hopes the number one pick from the 2020 draft will learn from the benching, Gallant provided a candid response.

“Sometimes the kid’s say ‘I’m going to come back and play real well.’ We’ll see what happens,” he said. “Maybe he’ll say it was a wake up call and that’s fine. I didn’t like the way he played the last game (against Washington). Three or four games prior to that were okay, but not great either.”

Lafreniere is quietly having a solid season with 17 points in 36 games. In fairness to Gallant’s decision, he’s only mustered one goal and two assists over the last 8 games played.

“Just be more consistent and play better and he wants the same thing,” Gallant noted. “He’s a good kid. It’s not like we don’t like the kid but there’s lessons to be learned. I was fortunate enough to play pro hockey and I got sat out some games. You just shake it off.”

Maybe this will work out as it did late last season, when he was a healthy scratch and returned with a two goal performance in a win over the Detroit Red Wings.

This is an important year for Lafreniere as well. His entry-level contract expires and he’ll be an RFA in July. So you have to assume there’s some added pressure to perform.

Here’s a look at the potential lineup: 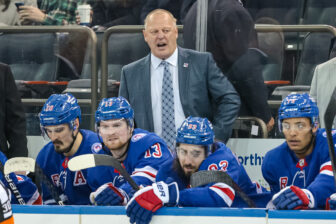