What lesson did Alexis Lafreniere learn by being scratched?

Alexis Lafreniere was purposely sidelined on Thursday in the Rangers 2-1 shootout loss to the Tampa Bay Lightning.

After being demoted to the fourth line at practice on Wednesday, Gerard Gallant talked about Lafreniere having opportunity but not being consistent enough. He doubled down on that reason when explaining the healthy scratch to the media before the game.

“Consistency is the word I mentioned yesterday,” Gallant said. “He wants to be better. We want him to be better. Just be more consistent in your game.”

What did Alexis Lafreniere learn from his scratch?

In all likelihood, the 21 year-old forward with 17 points in 36 games will be back in the lineup versus the Florida Panthers on Sunday. However, did Lafreniere really learn anything after being scratched?

Aside from probably being upset with the coach’s decision, Lafreniere was left scratching his head as to why he wasn’t on the ice in a tight game. Even as a fourth line player, he may have been able to help his team pick up the extra point.

Let’s face it, the message would have resonated more clearly if the Blueshirts won that game. Instead, Lafreniere witnessed the same inept power play unit eat up all the minutes and come away with squat.

It’s a power play unit that’s gone 0-8 in its last two games and 1-17 in the last four allowing a shorthanded goal. The Rangers are 1-2-1 in those contests. Yet it’s Lafreniere on the outside looking in.

That being said, Gallant hasn’t done a thing to change that unit all season and isn’t expected to do so anytime soon. In the end, it’s the coach’s prerogative but makes him seem slightly hypocritical trying to teach a young player a lesson about competing with consistency.

Well, if Gallant is frustrated with the situation, one could imagine Lafreniere feeling the same way.

While there’s no doubt that Lafreniere could be better, he’s been bounced around all four lines from left wing to right wing and back. Being the first overall pick also comes with a lot of pressure and this being a contract year doesn’t help.

Lafreniere is downplaying those factors and saying all the right things publicly. Behind closed doors, I’m sure this isn’t an easy situation.

As you can imagine, there’s already speculation about Lafreniere being traded. There’s been no indication at this time that Lafreniere has asked for a trade and the Rangers won’t move a cost controlled asset for a first round pick and prospects in the middle of a playoff fight.

There’s a slight possibility of Lafreniere being included in a blockbuster move at the trade deadline in March, but that’s too far away to really discuss in late December.

So the question needs to be asked again, what lesson did Gallant send to Lafreniere with that scratch?

I guess we’ll find out when the team plays the Panthers in Florida on Sunday. 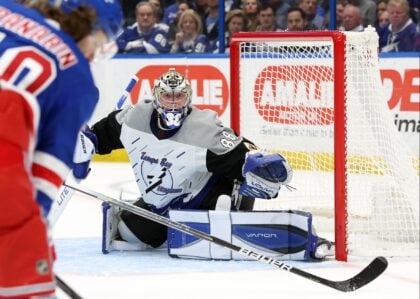