Igor Shesterkin was nothing short of brilliant in the New York Rangers 2-1 shootout loss to the Tampa Bay Lightning on Thursday. At the opposite end, Andrei Vasilevskiy was equally up to the task as both goalies combined to make 84 saves (Vasilevskiy 45, Shesterkin 39) and needed six rounds in the skills competition to decide a winner.

Of course, it never should’ve got that far because the Blueshirts inept power play failed to hit the net on a glorious 4 on 3 opportunity in overtime.

“I had a wide open net in overtime,” a somber Mika Zibanejad admitted. “If I hit any part of the net we’re smiling and go away happy.”

Alex Killorn scored the decisive goal in the shootout once Adam Fox was stopped by Vasilevskiy to give the Lightning a big win in the sixth round.

On night where goaltending ruled the day, the Rangers needed their anemic power play to produce just one goal to be a difference maker. Instead, they went 0-3 after going 0-5 against the Washington Capitals the night before.

Starting with their loss against the Pittsburgh Penguins that snapped a 7-game winning streak, the Rangers are 1-17 (5.9%) with a shorthanded goal against on the man advantage.

“I think we’ve had chances,” Zibanejad tried to explain. “I don’t think it’s a problem getting into the zone or struggling to get set up. Maybe a little more desperation. Maybe a little more direct when we get a chance to shoot and the other four guys are ready to crash the net…we’ve had some good looks. It’s just a matter of taking advantage of the chances we’re getting.”

Everyone knows that the first unit of Zibanejad, Artemi Panarin, Chris Kreider, Vincent Trocheck, and Adam Fox are looking to set up a one-timer from the left circle. Most times it’s Mika taking the shot, sometimes it will be Panarin.

After scoring 26 power play goals last season, Kreider has become a non factor. The Rangers aren’t shooting for tips or trying to make plays in the crease as was their trademark in 2021-22.

What’s even more frustrating is Gerard Gallant, who will demote or bench young players at the drop of hat, continues to throw this same unit out there. Despite watching them nonchalantly pass it around the perimeter for almost a full two minutes, he refuses to upset his veterans and shake things up.

Meanwhile, Alexis Lafreniere was in the press box being taught a lesson about consistency.

The Rangers first overall pick certainly hasn’t been consistent, and the scratch was warranted. Still, the message almost comes off hypocritical if you don’t hold the same standard to everyone in the lineup.

Igor Shesterkin turned aside 39 of 40 shots hurled his way by the Lighting and even made four excellent stops in the shootout. Unfortunately it wasn’t enough.

Mika Zibanejad, who absolutely owns the Lightning in the regular season opened the scoring at the 12:54 mark of the first period. It was his 16th goal of the year and his 7th in the last 5 matches against Tampa.

From there, it was all goaltending with both Shesterkin and Vasilevskiy putting on a show.

Shesterkin made several excellent stops including a Steven Stamkos one-timer early in the first. He also bailed out his defense a number of times, including a Brandon Hagel backhand all alone in front.

Vasilevskiy also proved why he’s still considered one of the best goalies in the world with an incredible stretching glove save to rob Filip Chytil. He also stoned Vitali Kravtsov on a few chances, including a breakaway.

As fate would have it, a fluky goal by Brayden Point tied the game early in the third period. Even though he had a wide open net, Point shanked the shot and hit Shesterkin in the pads to bank it in.

“Obviously the goaltending was … two world-class goalies, the two best in the world probably,” New York coach Gerard Gallant said. “They were outstanding. It was a good hockey game with a lot of chances generated both ways. Tough to lose in a shootout like that, but I thought we played great.” 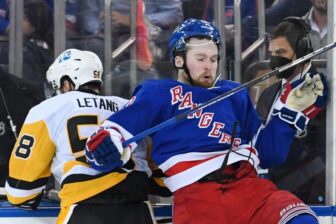