Alexis Lafreniere will be getting the night off for the New York Rangers as a healthy scratch versus the Tampa Bay Lightning on Thursday. Per Newsday’s Colin Stephenson, Sammy Blais will take his pace in the lineup tonight.

Lafreniere, 21, was criticized by head coach Gerard Gallant for his recent play and was demoted to the fourth line at practice on Wednesday.

“I want him to be better obviously. Laffy’s gotten some chances to play with good people and he’s played well at times, but it’s inconsistency,” Gallant said. “You have to be consistent but he’s not alone.”

The Rangers really posted a stinker against the Capitals in a 4-0 loss at home coming out of the break. A lot of players were passengers on that night, but Lafreniere has been for several games.

Sure, you can talk about special teams ice time or lack thereof, but lately he and the second power play are getting more of it. That being said, Lafreniere, for all his talent has yet to show he can elevate his game at a consistent level through an arduous 82 game regular season.

Bottom line, the benching was earned but is Sammy Blais really giving you a better chance to win versus the Lightning than Lafreniere? The answer to that is an easy no.

Here’s a look at the potential lineup:

This season, Lafreniere has amassed 17 points in 36 games. His 12 assists on the season tie a career high set last year and the youngster should surpass his top points mark of 31 as well.

While those are solid numbers for many young players, some feel Lafreniere should be doing much better being a first overall selection. As a draft lottery pick going to a team like the New York Rangers, who were on the up trend with superstar talent in place on eft wing (Artemi Panarin and Chris Kreider), ice time has been hard to come by. It could be having an impact on him as this is a contract year for the three-year pro.

There’s no doubt Alexis is saying the right things, but if he think he’ll cash in like Tom Stutzle did in Ottawa (8 years / $8.35M AAV), it’s highly unlikely.

Lafreniere will be an RFA at the end of the season. 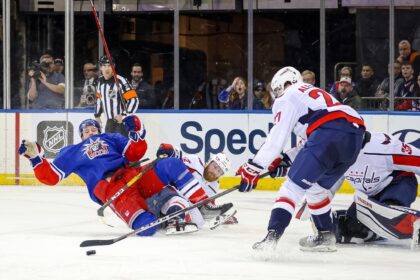