The New York Rangers were at practice today and per multiple reports, Alexis Lafreniere was on the fourth line skating with three other players. According to the NY Post’s Mollie Walker, the lines looked like this:

Is the team’s only first overall pick since the modern draft on his way to a healthy scratch?

Everyone knew that something was going to change after the Rangers no-show performance against the Washington Capitals on Tuesday night. A 4-0 loss that had head coach Gerard Gallant very upset with his team.

“We were garbage tonight,” Gallant said afterwards. “We didn’t deserve to win…I didn’t know what to do. I scrambled the lines again. Really disappointed in the group tonight. “One team showed up to win a hockey game and the other team didn’t… A lot of guys didn’t show up.”

Well aside from mixing up the lines in preparation for tomorrow night’s matchup against the Lightning in Tampa, Gallant had them doing sprints without the puck as punishment.

When practice was done, Gallant was asked about the potential line changes and Lafreniere.

“Laffy has gotten some chances to play with good people and he’s played well at times, but it’s inconsistent,” Gallant said as relayed by Mollie Walker. “So Laffy is getting maybe knocked down today in practice. Not saying he’s going to be there tomorrow. I don’t know where he’s going to be tomorrow… You could pick a lot of guys last night this morning who’s not going to play tomorrow. But we’ll decide that in the next 24 hours.”

Lafreniere, 21, is quietly having a strong campaign. Despite being bounced around from left to right wing and back on different lines, he’s amassed 17 points in 36 games. His 12 assists on the season tie a career high set last year and the youngster should surpass his top points mark of 31 as well.

Yet last night, he was one of the many obvious passengers that came back from the break and may very well start on the fourth line. Furthermore to Gallant’s point, Lafreniere has been inconsistent over the last few games.

The question is, would Gallant scratch the third year pro at this point? He did so very late last season after an 8 game stretch where he registered no points. The move worked as it sparked a two goal performance the next game against the Detroit Red Wings and he ended the regular season with 4 goals and 2 assists in his final 7 contests. That message also carried into a post-season where Lafreniere took his physical play to another level and registered 9 points in his first ever playoff run (20 games).

While it’s hard to see Gallant scratch Lafreniere this season, I still wouldn’t rule it out. 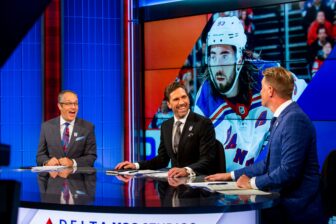