Exclusive: John Giannone talks New York Rangers insights from in between the benches this season

When it comes to covering the New York Rangers, very few do it better than MSG Networks very own John Giannone.

The six-time Emmy Awards winner has been with the network since 2002 and serves as the Rangers pre and post game host. However, it’s his role in between the benches that gives him a unique perspective on the players and team Blueshirts fans love.

In a conversation with Steven Pappas for Forever Blueshirts, John gives us his insights on the Rangers season and their recent turnaround.

The New York Rangers are entering the Holiday Break with a record of 19-11-5 (43 points) and hold the first Wild Card in the East. This is a fairly big deal because the Rangers were out of a playoff spot before going on a 9-2-1 run.

In the Rangers last game, a 5-3 comeback against the New York Islanders, they fashioned another spirited third period comeback which was a hallmark of the 2021-22 squad.

John Giannone referenced seeing that same resiliency by the way the team and Kaapo Kakko responded to his second period turnover. It was an egregious giveaway that led to an Islanders goal putting the team down 2-1 at the time.

As he watched Kakko review the play on an iPad, Giannone witnessed him drop his head down and keep it there until a pair of Rangers leaders came to talk with him.

“First it was Barclay Goodrow talking to him a little, then it was Chris Kreider talking a little more,” he said. “I was paying very close attention to this because when Kreider was done speaking, Kakko stood up on his skates, looked at his linemates at the end of the bench and said, ‘Let’s Go!'”

Kakko would go on to score the tiebreaker and game-winning goal with less than three minutes to play in the game.

The veteran broadcaster also added that the Rangers play in the third period during this hot stretch is one of the biggest reasons for the turnaround.

John Giannone had the best seat in the house for Jacob Trouba’s emotional tirade in the Rangers loss to Chicago on December 3rd. After delivering his second monster open-ice hit on a Blackhawks player which led to his second fight of the game, Trouba was being escorted to the locker-room. As he skated to the door with less than three minutes remaining in the period, he fired his helmet at the boards and yelled towards his teammates: “Wake the [expletive] up!”

Strategically positioned in between the benches, Giannone witnessed up close and personal what the Rangers captain did to try and motivate his team.

“It was an enough of is enough attitude,” Giannone recalls. “But no one expected what Trouba did. It was surprising since no one throws equipment or a helmet at the general direction of the bench. While there wasn’t too much of a reaction from the them at the time, the players spoke about it over the course of a couple of days and responded.”

The Rangers next game was against the St. Louis Blues and they were still struggling. Entering the third period trailing, the team rallied for their first of seven straight victories.

Regardless of how far the Rangers go this season, that moment will be looked at as a key turning point.

When it comes to the Rangers, their MVP is goaltender Igor Shesterkin. Although he’s struggled at times this season, Giannone believes he’s very close to his Vezina winning form.

“Igor Shesterkin is getting really close to playing like he did last season,” he said. “Similar to Henrik Lundqvist, he’s rising up to the occasion where his mentality is to not let another goal get by him at crucial times.”

Vitali Kravtsov has been one of the more intriguing storylines for the Rangers this season. His prior history of leaving the team instead of reporting to the Hartford Wolf Pack has been well documented.

Coming into the 2022-23 campaign, the 23 year-old former first-round pick in 2018 has had a hard time staying in the lineup. When he does dress, Kravtsov is bounced from line to line depending on the matchups and flow of the game. It’s something Giannone believes we’ll see more of this year.

“From an organization standpoint, there’s a lot there, but they also realize there’s a lot to learn too,” Giannone explained. “When the Rangers return against the Capitals on Tuesday, I don’t think you’ll see him back on the first line (where he finished versus the Isles). Kravtsov is a right wing and you know who is the first line left wing for the Capitals. I don’t think Gallant wants to match him up against Ovechkin, so Barclay Goodrow will be back up there.”

As a broadcaster, Giannone is no fan of this season’s scheduling now that the regular season series against the Islanders has concluded in December with almost four months left to play.

“It would be something if those two teams met in April.” 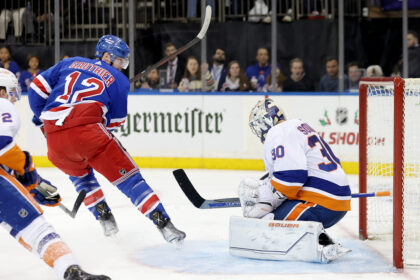