The NY Rangers are fighting for a wild card spot as 2022 comes to a close. It’s not where Gerard Gallant or anyone else for that matter would’ve predicted after a run to the Eastern Conference Final last season.

At 19-12-6, the Blueshirts are tied with the New York Islanders for 5th in the Metropolitan Division and the last wild card spot in the East. It certainly hasn’t been an easy campaign, but how much of it may be caused by the head coach’s own doing?

Let’s examine three New Year’s resolutions we’d like to see starting on Sunday when they face off against the Panthers in Florida for their first match of 2023.

At the top of many people’s lists is Gerard Gallant’s propensity to juggle the lines at the first sign of trouble. It’s nearly impossible to try and figure out the number of line combinations the head coach has gone into a game with this season and how different they were when the final buzzer sounded.

“I’ve been switching them quite a bit,” Gallant recently admitted. “Even in the 10 game stretch there was a lot of different combinations. Again, I don’t like that but I wan to try and find guys that are going to be consistent, play hard, and well together… You saw it three weeks ago, we put [Alexis Lafreneire and Kaapo Kakko] with Mika (Zibanejad). It went well for some games and then it tailed off real bad.”

That 10 game stretch Gallant is talking about includes a 7-game winning streak, and he did indeed make lineup tweaks throughout.

As a head coach, the only impact you can directly have on a game once it’s started is juggling the lines. Many coaches use it, but Gallant has taken into to a whole new level that even Alain Vigneault would be embarrassed by.

It’s time to at least set the top two lines and not touch them for a good stretch. Gallant preaches his desire for consistency but hasn’t really fostered it with his ceaseless in-game line shuffling.

Do something about PP1

I mean, they go out there and do the same thing over and over expecting a different result. To make matters worse, Gallant let’s them almost always eat up the full two minutes to boot.

Starting with their loss against the Pittsburgh Penguins that snapped their season-high 7-game winning streak, the Rangers are 1-17 (5.9%) with a shorthanded goal against on the man advantage in four games.

“I think we’ve had chances,” Zibanejad said after a shootout loss to Tampa. “I don’t think it’s a problem getting into the zone or struggling to get set up. Maybe a little more desperation. Maybe a little more direct when we get a chance to shoot and the other four guys are ready to crash the net.”

The Rangers top power play is stale and predictable to excellent penalty killing units. Everyone knows that Zibanejad, Artemi Panarin, Chris Kreider, Vincent Trocheck, and Adam Fox are looking to set up a one-timer from the left circle. Most times it’s Mika taking the shot, sometimes it will be Panarin.

After scoring 26 power play goals last season, Kreider has become a non factor. The Rangers aren’t shooting for tips or trying to make plays in the crease as was their trademark in 2021-22.

It’s time for Gallant to do something. Either change up the personnel of PP1 or give PP2 equal time and opportunities.

Stop scratching or demoting the kids

Alexis Lafreniere’s scratch against the Tampa Bay Lightning is probably the straw that broke the camel’s back.

Gallant is the head coach and will make moves he deems fit, and a scratch can motivate young players. However, if you want to preach winning games over developing young players, scratching Lafreniere in favor of Sammy Blais isn’t driving home the message.

What’s frustrating for fans is Gallant could’ve stuck with the practice lines from Tuesday and start Lafreniere on the fourth line. Instead, he put one of his better offensive players in street clothes in favor of Sammy Blais, who hasn’t scored a goal since May 1, 2021 as a member of the St. Louis Blues.

Kaapo Kakko is also the best right wing on the team and needs to remain on the first line with Kreider and Zibanejad. Stop bouncing him everywhere because you don’t trust him as much as you do Barclay Goodrow or Jimmy Vesey.

The New Year is upon us and Gerard Gallant should resolve himself to addressing these three major issues. 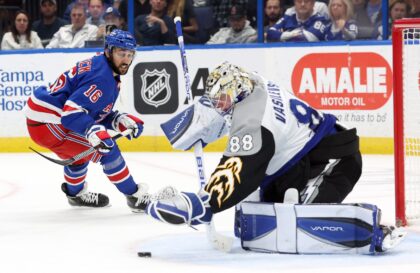 Also Read:
A look at the New York Rangers struggles out of the break