Since their return from Christmas break, the New York Rangers have lost to the Washington Capitals in regulation and to the Tampa Bay Lightning in a shootout.

While the Rangers were shutout by the Capitals, they held the lead for much of the game against the Lightning. Thursday night’s game also saw Gerard Gallant make the interesting decision to scratch Alexis Lafrenière. The shootout loss to Tampa Bay was undoubtedly the better game for the Rangers this week and could lead to getting back on track.

A major reason for the Rangers’ lack of success this week was their inability to score on the power play. They were zero for five against Washington and zero for three against Tampa Bay. Though the Rangers outshot the Capitals 32-30 overall, they did not record a goal at even strength or on the power play. The situation was similar against the Lightning. Again, the Rangers outshot their opponent, 46-40 this time. However, they only scored one goal in the first period, courtesy of Mika Zibanejad.

The power play has not been a strength for the Rangers this season, though it did see notable success during the seven-game win streak. Currently, the Rangers’ power play ranks 18th in the NHL at 21.4%. Improving upon this element of their game is paramount to making the playoffs and having success should they get there.

Maintaining the lead is something the Rangers have struggled with this season. On many occasions, they have not given a complete for the entire game. On Thursday against the Lightning, the Rangers protected their lead well for the first two periods with a lot of help from Igor Shesterkin. However, Tampa Bay came out with more energy in the third period which the Rangers could not quite match. This ultimately resulted in the Lightning tying the game.

While holding onto the lead is important, trying to win a game 1-0 is unlikely to prove successful. Therefore, not continuing to apply offensive pressure is part of the reason the game was decided at the end of 60 minutes.

The Rangers outshot the Lightning 5-3 in overtime, but truly had many more chances. Consistently missing the net kept any of these chances from being a real threat. Once again, the Rangers’ inability to score on the power play caused them trouble here. A power play in overtime is a tremendous opportunity to capitalize and win the game. But the Rangers fell short.

Similarly, Kaapo Kakko could have won the game for the Rangers in the shootout but hit the post. He nearly ended it by beating Andrei Vasilevsky on a deke. While this is further proof of Kakko’s improvement of late, it also fit with the night’s theme of coming close but not quite succeeding.

Overall, there were some positives for the Rangers in the game against the Lightning. But after a winless two game block that clearly saw some post-break rust, the Rangers could use a win on Sunday against the Florida Panthers.

Gerard Gallant’s somewhat controversial decision not to start Alexis Lafrenière on Thursday was certainly warranted. But time is needed to determine whether it was the correct one. Recently, Filip Chytil and Kaapo Kakko have begun to take off. While Lafrenière has 17 points on the season, tied with Chytil’s total and above Kakko’s total of 15, he has not met the lofty expectations.

Lafrenière was the first overall pick in 2020, and this is his third NHL season. While it is important to give young players the time they need to develop, there comes a time when management and the coaching staff really look to them to step up. For Lafrenière as a first overall pick, there is even more pressure. He has recorded only five goals so far which definitely falls below expectations.

As Chytil and Kakko continue to thrive and consistently produce offensively, Lafrenière needs to find his game too. This scratch may serve as a wakeup call for him. 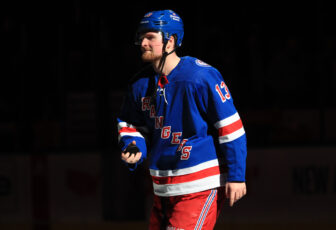 Also Read:
What lesson did Alexis Lafreniere learn by being scratched?