Rangers coach Gallant on Lafreniére: “I just want him to play a strong game”

The New York Rangers morning skate heading into tonight’s matchup against the Avs indicated that we are unlikely to see any changes from Sunday’s lineup.

Nils Lundkvist, who missed the last game with a non-COVID illness did not skate today. Libor Hajek will stay in the lineup paired with Patrik Nemeth.

Although Gerard Gallant would not confirm his starting goalie, multiple reports indicated that Alexandar Georgiev is the likely starter. Meanwhile, Igor Shesterkin did join as the third goalie but will not come off IR.

Earlier today, Forever Blueshirts wrote about Alexis Lafreniére’s diminishing ice time over the last several games. That even included being benched in the third period of a 1-0 loss against the Predators on Sunday.

“I just want him to play a strong game and be stronger on the puck,” Gallant noted about the benching. “We talked about those turnovers and he was trying to make too many of those cute plays that didn’t work.”

No one is likely more frustrated about being glued to the bench than Lafreniére himself, who acknowledges and owns his mistakes.

“He knows that,” the coach said. “As soon as he came back to the bench he’s frustrated. It’s our job as coaches trying to win a hockey game that if you’re not playing the best game possible then you might sit a little bit.”

To Gallant’s credit, he truly does take it game-by-game. The veteran bench boss gives each player a fresh slate every day, and tonight will be no different.

“I don’t do that a lot (benching), but sometimes you’ve got to make a point,” Gallant explained. “He wasn’t the only one.”

Anyone who watched Sunday, would have also seen Kaapo Kakko and Dryden Hunt benched for stretches too. No young player appears to be immune. 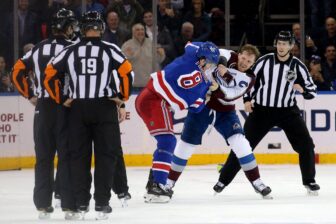 Also Read:
How to watch Tuesday’s New York Rangers game against the Avalanche

NHL COVID cases on the rise

There has to be a growing concern around the NHL as a spike in positive cases is happening around the league. Read more.