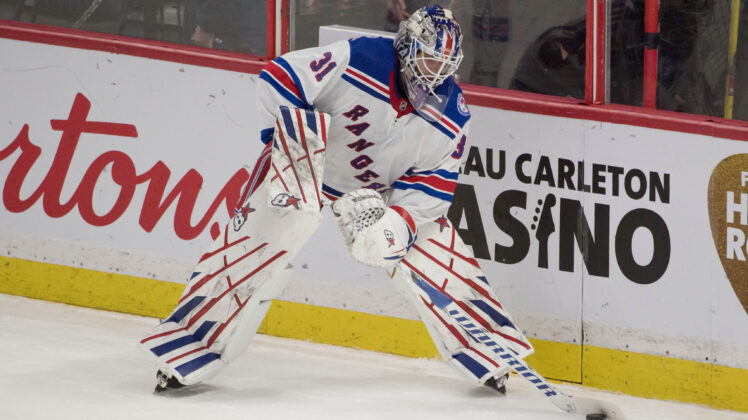 This year’s race is tight and it may be hard to differentiate some of the top names up for the award. The current top three favorites as of right now are Hurricanes goalie Frederik Andersen, Lightning’s Andrei Vasilevskiy, and the Rangers own Igor Shesterkin.

There really isn’t much separating the three by way of wins, saves, and goals against. Although on Sunday, Shesterkin was just inches away from recording his first career goal on the same night he picked up a milestone win.

Shesterkin, 26, made 15 of his 29 saves in the third period to earn his 50th career victory Sunday night as the visiting New York Rangers recorded a 2-1 victory over the Ottawa Senators.

Shesterkin won for the 11th time in his past 13 starts and picked up his 24th win of the season. He also allowed two goals or less for the 15th time in 20 games and picked up his milestone win in his 79th career game, becoming the 14th goalie in NHL history to get at least 50 wins within his first 79 appearances.

Shesterkin also missed an empty-net goal with 1:15 remaining when the puck sailed slightly to the left and inches from the net, then made a glove save on Connor Brown’s shot with 58.5 seconds remaining.

“We trust him, he’s won a lot of games for us,” Gerard Gallant said of Igor’s attempt that led to an icing. “If they would’ve knocked it down and scored on us we’ll move on from that. I enjoyed it, I wish it would’ve went in the net.”

This season, Shesterkin’s numbers are spectacular. For goalies that have played the minimum 25 games you need to be considered for the Vezina, Igor leads the NHL in GAA (2.01) and SV% (.939). His 24 wins ties him for third, two behind Sergei Bobrovsky’s league-leading 26.

A Shesterkin goal would likely secure the Vezina

It’s pretty amazing just how good Shesterkin is at handling the puck. What’s shocking is that despite his incredible ability, he still hasn’t picked up an assist this season. Andersen, whom he’s competing with for the Vezina has four.

Let’s make one thing clear, Shesterkin has started the play out his own zone on at least four or five goals this year. They simply don’t give assists to the third man to touch the puck.

“The plays he makes and the breakout passes are just spectacular,” Ryan Strome said after the win against Ottawa. “He’s probably a better passer than 75 to 80 percent of our team. I think guys would openly admit that too.”

All things being equal, Shesterkin remains the favorite to win the Vezina but a goal would pretty much seal the deal. Will he get one this year? That may be difficult since Ottawa made the mistake of a soft dump in with their net empty and almost paid for it. I seriously doubt many of the top teams fighting for a playoff spot will make that same error.

Regardless, it seems almost inevitable that Shesterkin will get a goal at some point in his career.

“The sound (on the bench) was getting louder and louder as the puck was getting closer to the crease,” Strome said. “It’s only a matter of time.”

It may also just be a matter of time for him to claim his first Vezina title as well. 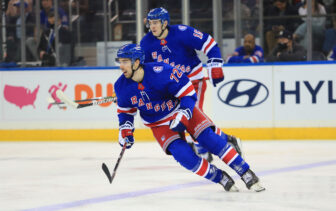