The New York Rangers made a commitment to Jacob Trouba when they acquired him from the Winnipeg Jets in 2019 and then signed him to an 7 year-contract with an $8M AAV.

This summer, they took it a step further by naming him the 28th captain in franchise history.

“Since he joined the Rangers, Jacob has consistently displayed all of the qualities we want in a leader on and off the ice,” GM Chris Drury said in a press release. “As we look to take the next step as an organization, he is a role model for all of our players to follow and the perfect choice to be our captain.”

His commitment on the ice to his teammates only takes a backseat to his wonderful wife, Kelly. Trouba was emotional at his press conference discussing her sacrifices and hard work as a doctor.

One of his reasons for wanting to leave Winnipeg was to align their career goals. After completing her work in Florida, it appears they are ready to be full-time residents in New York.

According to the NY Post, the Trouba’s have sold their condo in Florida and will be living in Manhattan. Kelly is currently doing her residency at Lenox Hill Hospital.

“One person that helped me through the transition was my wife, Kelly.” Trouba wrote in a letter to fans. “Coming to New York three years ago was not just a great opportunity for me, but it was also a place my wife could chase her dreams and her career as a physician. There isn’t a moment of this journey that we take for granted.”

Trouba will proudly lead the Rangers on the ice this season and hopefully past the Eastern Conference Final where they fell in six to the Tampa Bay Lightning.

Mark Messier and the Fireman’s Helmet

On September 11th, the world remembers the lives lost on that solemn day. The New York Rangers posted their ‘Never Forget’ message with a photo of Mark Messier wearing a fireman’s helmet.

Here’s more on that story.

After the tragic events of September 11, 2001, Mark Messier honored the many firefighters who lost their lives trying to save thousands.

With the Rangers set to open the 2001-02 season at Madison Square Garden, Messier would soon raise the spirits of everyone in attendance. Especially, the number of first responders in the building.

Prior to the game, firefighter Larry McGee of Engine 66 in the Bronx presented Messier with a helmet. The gear belonged to Chief Ray Downey, a 40-year veteran of the department who was lost on that day.

Messier wore it proudly and today it’s one of the lasting images of love and unity in New York during that difficult time.

The Rangers gave all the fans in attendance a little something to smile about hours later when Brian Leetch scored in OT to beat the Buffalo Sabres 5-4. Messier assisted on Eric Lindros’ first goal as a member of the team in that game as well.

You can read more on the story here. 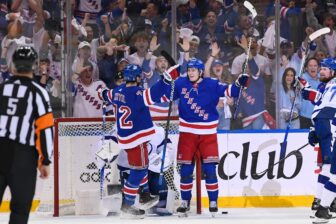 Also Read:
Kaapo Kakko and Alexis Lafrenière have opportunity to blossom this season