The Colorado Avalanche have claimed forward Dryden Hunt from the New York Rangers via waivers on Thursday afternoon.

This was the final year of a two-year deal Hunt signed last summer for an AAV of $762,500. The versatile forward had a decent shot and played a physical brand of hockey whenever Gerard Gallant would insert him into the lineup.

The Avalanche were recently dealt a blow to their roster when they announced forward Gabriel Landeskog would be out 12 weeks after knee surgery.

Now that Dryden Hunt has been claimed, the Rangers will have approximately $946,000 in cap space.

This leaves the Blueshirts with a 22 man roster and Vitali Kravtsov as the 13th forward. He’s currently looking to get back into the lineup after being injured in the season-opener on hit by Tampa Bay Lightning defenseman Victor Hedman.

“We’ll see how the team is playing,” he said Monday night when asked if Kravtsov will go right back into the lineup. “I mean, it wasn’t fair to the guy; he played a minute and a half the first night, and he gets hurt. We’ll see. We’ll see how we’re going.”

Here’s a look at the Rangers current forward lines that are likely to play versus the Sharks tonight:

Kravtsov’s best bet to get back in will be on the third line. That requires either Jimmy Vesey or Ryan Reaves to be scratched and for Sammy Blais or Barclay Goodrow to drop down to the fourth line.

At this time, Kravtsov also remains one of the top candidates to be traded for a rental at the NHL Trade Deadline on March 3.

Based on the prorated cap space as it stands today, the Blueshirts will have around $800K which is equivalent to around $3.5 million to play with at the deadline. Adding Kravtsov’s cap hit back the other way in a deal will allow them to be players in the Patrick Kane sweepstakes expected this year. The Blackhawks will need to retain 50% of Kane’s $10.5 million AAV for any deal with a contender to work. 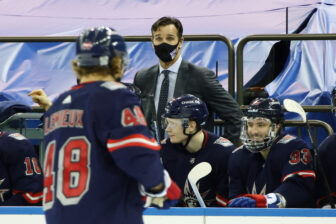