Rangers Mika Zibanejad voted in to All-Star Game, will not attend

The challenge was on and New York Rangers’ fans responded by voting in Mika Zibanejad to the All-Star Game via The Last Men In vote. Unfortunately, Mika cannot attend the festivities.

“Thank you to all of the fans who voted for me to play in the 2022 NHL All-Star Game. Unfortunately, due to a personal situation in Sweden, I will be unable to attend this year,” he wrote on Instagram.

“Being an NHL All-Star, and representing the Rangers with Kreids and Foxy, would have been an absolute thrill. Thank you to everyone for understanding.”

Zibanejad, 28, has been selected for the first time as an All-Star and would’ve joined Chris Kreider and Adam Fox in Las Vegas on February 4-5.

This season, Mika has scored 14 goals and 21 assists for 35 points in 39 games. His point totals are tied for third with linemate Kreider

Fox, 23, has recorded 128 points in 164 NHL games to go along with a +53 rating and only 60 penalty minutes. The native of Jericho, LI shocked the hockey world by winning the Norris Trophy for best defenseman in his sophomore season. A feat only accomplished by one other rearguard, Hall of Famer Bobby Orr.

Kreider, 30, is the longest tenured member of the team in his 10 season with the Rangers. The veteran leader made his NHL debut with the Blueshirts back in 2012-13.

Kreider’s 24 goals ranks third in the NHL and his 12 power play goals still holds at number two. His 17 points on the man advantage is tied for third in the league. 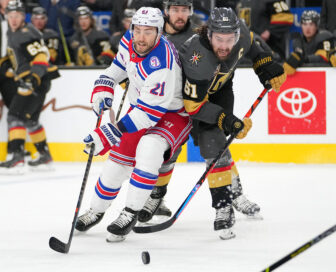 Also Read:
Rangers get back Goodrow and Hunt, and Gallant not surprised about team’s success