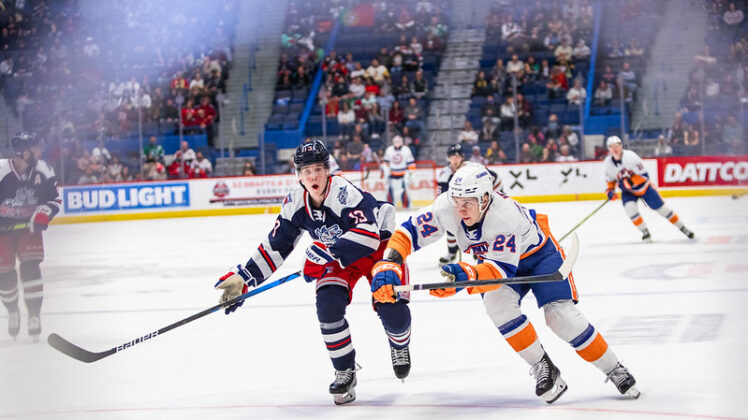 This weekend, Nils Lundkvist was a force for the Wolf Pack, registering 1 goal and 3 assists in 2 games of action. The 4 point weekend now brings his totals up to 3 goals, 8 assists for 11 points in 20 games since being sent down by the Rangers.

After picking up an assist in his AHL debut, Lundkvist suffered an 8 game scoreless drought. Since then, he has 7 points (2G-5A) in his last 5 games and 10 points (3G-7A) in his last 11 contests.

Lundkvist, 21, is another first round selection from the 2018 draft (28th overall). Before being sent down to the Wolf Pack to develop he had four points in 25 games in the NHL.

“We’re starting to get to know Nils,” Pack head coach Kris Knoblauch said. “He does possess those traits Jones has, perhaps not as dynamic. Nils is a threat because his shot is dangerous and we see that on the power play.”

Lundkvist may be on the small side at 5-11 and 187 lbs, but makes an excellent outlet pass that’s coupled with an elite shot. Now that he seems to be adjusting to the smaller ice surfaces and the speed of the game, he should be able to make an impact in the NHL next season.

Will it be for the Rangers or another team? That remains to be seen with the NHL Trade Deadline officially just two weeks away.

Chris Kreider scored twice, Igor Shesterkin made 45 saves and the New York Rangers opened a four-game road trip with a 4-1 victory over the Winnipeg Jets on Sunday night.

“Honestly, you can go back eight or nine years and take some of quotes about Hank (Lundqvist) and apply them to the way Shesty is playing right now. I mean, we are truly spoiled,” Kreider said in amazement.

Shesterkin made 14 saves during six Winnipeg power plays and improved to 8-1-1 in his past 10 starts. He maintained the two-goal lead in the final minute of the first period when he dove backward and used his glove to prevent a shot from Mark Scheifele from crossing the goal line during a Winnipeg power play.

“The guy is unbelievable. He’s been our best player all year. At this point, nothing really surprises me,” Kreider marveled. “He’s just otherworldly. I don’t think there are any superlatives left for him, he’s that good. It really is incredible. Was really hoping he was going to get his first (goal) tonight.”

Kreider scored for the third straight game and netted his 37th and 38th goals. He pulled into a tie with Edmonton’s Leon Draisaitl for second and moved within one of Auston Matthews for the league lead.

Kreider got his latest goals in two different ways.

With 2:32 remaining in the first period, Kreider scored his league-leading 19th power-play goal to give the Rangers a 2-1 lead. He crashed the net, and when Artemi Panarin’s cross-ice pass from the left side deflected off the stick of Winnipeg’s Adam Lowry, Kreider backhanded the puck past goalie Connor Hellebuyck.

Kreider got his second goal by finishing off a partial breakaway 6:21 into the third.

After Shesterkin made consecutive saves on Pierre-Luc Dubois, Mika Zibanejad cleared the defensive zone by banking the puck off the right boards in the offensive zone. Kreider outraced Jets defenseman Nate Schmidt and backhanded the puck with Hellebuyck sprawled out in the crease.

“I am playing with some unbelievable linemates (Mika Zibanejad, Alexis Lafreniere) and unbelievable defensemen every time I’m on the ice,” Kreider said. “The team is playing well. Our play has been clicking.”

The latest Trade Bait Tracker has been updated and now contains 35 names. Check out who is the top target for teams with just two weeks left before the NHL Trade Deadline. Read more.