The New York Rangers have placed six players on waivers. Defenseman Anthony Bitetto and goaltender Keith Kinkaid being the two most prominent. Additionally, Jonny Brodzinski, Tim Gettinger, Anthony Greco, and Ty Ronning were included on that list. We will know who cleared waivers by tomorrow afternoon.

This means Alexandar Georgiev is likely pulled off the trade block and the 7th defenseman spot is most likely coming down to Jarred Tinordi.

Also today, the Rangers sent 2021 first round pick Brennan Othmann back to the OHL.

The New York Rangers announced today that the team has assigned Brennan Othmann to his junior team, the Flint Firebirds of the Ontario Hockey League (OHL). A first round selection (16th overall) by the Rangers in the 2021 NHL Draft, Othmann skated in New York’s 3-2 preseason win over Boston on September 28, notching 11:55 minutes of ice time.

The Rangers roster is now at 40 and should be trimmed to 34 by tomorrow.

Brennan Othmann knows he needs to get stronger

Othmann has actually looked very good in camp considering he is just 18 years old. It’s a fact not lost on him as he explained today.

“You haver to get stronger,” he admitted. “You’re playing against guys like Reaves, who is 225 lbs, and if you line match against him and you’re a 180 lbs like me, 9 times out of 10 he’s coming away with the puck.”

“If I can throw on another 5 or 10 lbs of muscle and come back with a little more confidence, and play well in the OHL next year, I may have a good shot next year,” Othmann said. “I think if I can build strength, I think I can turn into a better hockey player than I am now.”

The Rangers have high hopes for Othmann as he looks like a future replacement for a player like Chris Kreider one day. 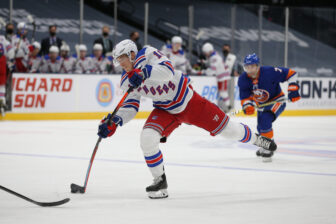 The NHL Trade Bait Tracker for the 2021-22 season has been set. While training camps continue, a few names have emerged as possible trade deadline rentals already. Read More.