After a nice win to start the preseason over the rival Islanders, the New York Rangers will head to Boston to take on the Bruins.

Game and broadcast information listed below in bold and italics.

This will be Trocheck’s first game wearing a New York Rangers sweater after singing a 7-year contract on July 13 with an AAV $5.625 million.

“I’m excited [to get started],” Trocheck said before camp opened. “Every year there’s this kind of limbo where we sit around waiting for the season to start. I think everybody is pretty eager to get going.”

Trocheck, 29, registered 21 goals and 51 points with the Carolina Hurricanes last season. He is a two-way center that plays with an edge. Another key aspect to his game is an ability to win faceoffs. For his career, Trocheck is 52.1% on draws.

Here’s a look at the New York Rangers roster for tonight: 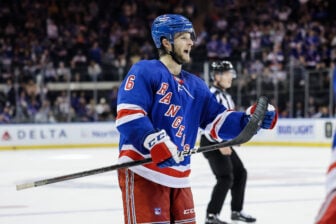 Also Read:
Zac Jones, Jimmy Vesey, and Brennan Othmann make most of their opportunity vs Isles