The New York Rangers are scheduled to play the New York Islanders tomorrow at the UBS Arena.

At this time, the game is still on but with Zdeno Chara now being the 7th Islanders player to be added to the COVID protocol list there’s concerns.

When head coach Gerard Gallant was asked if the game would be postponed he responded, “Not that I know of.”

Isles GM Lou Lamoriello noted that the game is still set to be played. He also said the NHL did not provide a threshold of how many players need to be out before rescheduling games.

The following players are out for tomorrow’s game against the Rangers due to COVID:

In addition, the Isles will also be without out Ryan Pulock (LBI) and Brock Nelson (LBI).

Head coach Gerard Gallant shook up his lines late in the game against the Sabres. He moved Dryden Hunt to the first line and dropped Barclay Goodrow to the fourth.

Apparently, the coach likes Hunt with Mika Zibanejad and Chris Kreider so he will keep them together for at least the start of tomorrow’s game.

“We’ve liked [Hunt] from day one,” he said. “He’s played well, worked hard. He’s played a complete game for us – consistency every game.”

Hunt, 25, has just two points on the season in 18 games. While he does bring a yeoman’s work ethic to the line, his toolbox of skills are limited.

“My game’s not very flashy,” Hunt said. “I play a pretty simple game and bring it every night.” 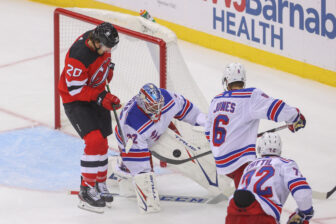 Also Read:
Adam Huska could be the call up if the Rangers send Alexandar Georgiev down

Other line up news

Rookie Nils Lundkvist was back on the third defense pairing with Patrik Nemeth today at practice and appears likely to be back against the Islanders.

The coach did not announce a starting goalie but Igor Shesterkin is expected to get the nod.

Could J.T. Miller be headed to Minnesota? That and Canucks chaos here.