The New York Rangers have to be feeling really good about their game right now.

“Every game’s different and has a different identity,” he continued. “At the end of the day we found a way to win and get two points.”

The team’s next game is Wednesday on the road against the Islanders in their new home, the UBS Arena. It’s a game that screams “Rangers Beware!”

Struggling Islanders desperate for a win

If someone were to look at the match up and saw Team A is 11-4-3 winning five of their last six games, they’d say this game was in the bag.

Team B is also just 5-8-2 and on a six game losing streak. Furthermore, during that span they’ve been outscored 27-6 and shutout twice.

I mean, we are talking no contest. Right??

It’s a rivalry game that will be be filled with all the piss and vinegar both teams can muster. Matter of fact, the team that brings the most angry energy is likely to win the contest regardless of any recent play or streaks.

Can the Rangers really take the first ever game between the two rivals in the Islanders new home? Can the Islanders that have gone to the Conference Final two consecutive years in a row lose their 7th straight, and third to open UBS Arena?

The answer is yes. However, one can also conclude that the Rangers will bring out absolute desperation in the Islanders. That could be just what the doctor ordered for them and help them get their season on track.

Rangers are the underdog

For the Blueshirts to prevail on Wednesday, it’s likely better for them to go in with the mindset that they are the underdogs.

Ignore the standings. Forget about their record. Act like they’ve lost six in a row. Remember what the Islanders did to them last season and serve up some payback.

For all the hoopla that transpired out of the Tom Wilson incident, it was the Islanders manhandling them in the final three meetings by a combined score of 13-1 that ended their playoff hopes.

The Islanders are hurting. Anders Lee is on COVID protocol and Ryan Pulock is out with a lower-body injury. They are slumping and in general disarray. In other words, they are dangerous.

No, the Rangers are not the favorites. At least not mentally. That’s the best approach.

Trouba talked about different ways to win. Well, come Wednesday they may have to win a nasty slugfest. If they can, the Blueshirts will be putting a serious stamp on who they are this season.

They will also put the Islanders in an even deeper hole trying to make the playoffs. A hole that has them already 7 points out of the final wild card spot with 5 teams ahead of them. 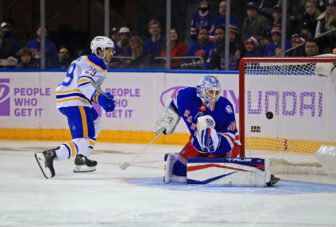 Also Read:
What can the New York Rangers do about Alexandar Georgiev

Is Kevin Fiala on the outs in Minnesota? Plus where can the Habs send Ben Chariot. Read more here.