What can the New York Rangers do about Alexandar Georgiev

Make no mistake about it, the decision to pull Alexandar Georgiev in a tie game to start the third period was not an easy one for Gerard Gallant.

When he was asked about why he opted to make the move, he dodged that question as if it was a runaway train heading his way.

Georgiev, 25, has been on a decline from the moment Igor Shesterkin joined the team and created a three-headed goalie monster in the 2019-20 season.

Entering his 5th year in the league, this big of a drop off was simply not expected. His main issues this season are as follows:

“I don’t want to give myself excuses,” Georgiev said earlier this season. “Just focus on my game. Every day come to the rink here with the guys trying to improve.”

The pending RFA with arbitration rights is apparently off. Considering Benoit Allaire is still the goaltending coach, this is likely more than just mechanics.

It’s possible the lack of playing time in a contract year could be a big issue for him, which is manifesting in his game on the ice. Georgiev was rumored to have asked for a trade this offseason, which he denied. 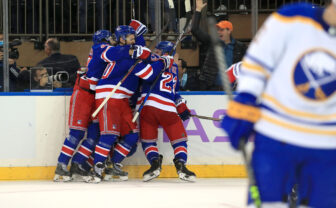 Also Read:
Rangers get goal by Ryan Lindgren with .7 on the clock to win wild one against Sabres

What can the Rangers do about Georgiev?

So what can the Rangers do about Alexandar Georgiev? This question is going to dominate the team’s storyline until something is decided.

A demotion to the Hartford Wolf Pack could be an option. MSG Analyst Steve Valiquette touched on it briefly after the game, hinting that AHL playing time would be good for his confidence.

The problem is sending him down requires waivers. First for Georgiev, and secondly for Keith Kinkaid to be called up. Chris Drury could get around having Georgiev pass through waivers if he can get Alex to agree to a conditioning stint, similar to what Libor Hajek just did.

Of course, it’s possible that Georgiev could decline which leaves the Blueshirts with only one other option. A trade.

At this point Georgiev would likely not fetch a third round pick this early in the season. However, if Drury could wisely package him with Vitali Kravtsov, it should yield a better return.

One thing is for sure, staying status quo will not help Georgiev or the Rangers. He is now a known liability in net. With huge games against the Islanders (2x), Flyers, and Bruins spaced over 8 days, those should all go to Shesterkin.

A decision is coming for the Rangers, and it may come today.