The two helpers brought Fox to 100 points in his 135 game career. Only two other Rangers’ defensemen were able to hit the century mark in points in 135 games or less. Those names are Brian Leetch and Sergei Zubov. Not bad company for the Jericho, LI native.

Fox, 23, won the Norris Trophy in only his second season in the league. A feat accomplished by one other defender, Bruins legend Bobby Orr. This season, Adam has 11 points in 10 games and leads all NHL defenseman with 58 points since the start of the 2020-21 season.

The young defenseman was also recognized as the winner of the 2021 Steven McDonald Extra Effort Award and was named the team’s MVP last season. He’s expected to be named to Team USA for the Winter Olympics.

“I feel like I’ve been a Ranger my whole life,” he said after signing. “There’s no place I’d rather be.”

Pretty good for a Flames’ 3rd pick in 2016 (66 overall) and then acquired from the Carolina Hurricanes April 30, 2019 for a second round pick and a conditional third round pick.

Artemi Panarin, 30, factored in both Rangers goals last night. It was his second multipoint game on the year and the 49th with the team. After a slow start, he has 5 points in his last three games and is at a point per game clip with 10 points in 10 games. 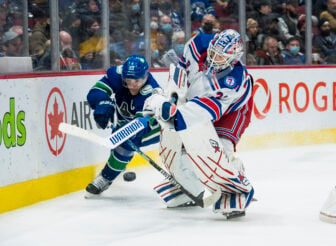 Also Read:
New York Rangers get taste of own medicine in OT loss to Canucks 3-2

ESPN’s Emily Kaplan says that a deal is “at the 1 year line” for Jack Eichel. Read more here.