Rangers Roundup: Alexis Lafrenière on his way to NY; and top PTO candidates

The ice at the MSG Training Center is starting to see more skate blades touch it. As players continue to make their way to NY for the opening of camp; the Blueshirts most promising young player is on his way too.

The Quebec native and Rangers first overall draft pick in the 2020 Draft posted a photo on his IG story. His car was all packed and ready to go with the words, “See Ya” and going to NYC below it.

Heading into the 2021-22 campaign, expectations are high for the soon to be 20 year-old forward. He’s projected to play on one of the top two lines at either left or right wing. Furthermore, he should see more power play time this season as well.

Lafrenière finished last year with 21 points in 56 games but managed 13 of those points in the final 25 games of the season. He also scored 8 of his 12 goals in the team’s final 23 games. It wasn’t an easy season for the rookie, but he remains upbeat.

“I think I’ve always been the same,” he told the press. “I’m just happy when guys have good games, when they make great plays. Just happy to be here for sure. And with the group we have, it’s always a lot of fun.”

New head coach Gerard Gallant said this summer he’d like to see him in a top six role, either at left or right wing. 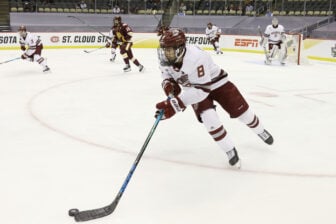 Over at The Daily Goal Horn, we took a look at the top UFA’s available and tiered them into categories for a PTO. Read more here.