The New York Rangers’ prospects continue to head into town for the start of training camp.

Rookie camp begins on September 10 with this year’s first round pick Brennan Othmann in New York ready to show why he was selected. As other prospects prepare for the week ahead, Mollie Walker of the NY Post reports the Rangers looked into bringing in UMASS captain, Bobby Trivigno to camp.

Chris Drury has plenty of connections to hockey in Massachusetts, similar to his predecessor Jeff Gorton. It really shouldn’t be surprising the Rangers continue to look at places like UMASS, BC, and BU for talent.

Trivigno led UMASS to the Frozen Four Title and was named Most Outstanding Player. 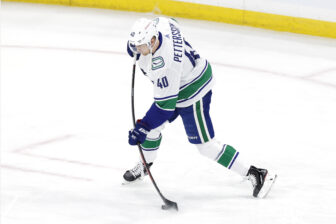 Today marks the 10th Anniversary of the Lokomotiv plane crash that claimed the lives of almost everyone on board. 1994 Stanley Cup champion, Alexander Karpovtsev was one of those souls. He was just 41 years-old at the time and serving as the team’s assistant coach at the time.

“We were all sickened to see the loss of life in that tragedy when the plane went down, but he was a wonderful friend and family guy and a huge component of this team,” former Rangers goalie Mike Richter said. “There was only one Potsie. He had a great personality and just was who he was.” via NYPOST

He was not the only former member of the Blueshirts to pass in the accident. Karel Rachunek who played two seasons on Broadway and Jan Marek a former draft pick were also victims of the tragedy.