The New York Rangers are winning which is what matters most. However, their best player Artemi Panarin is struggling even if his head coach won’t admit it.

“He’s bringing it,” Gerard Gallant answered to a question if he needs more from his star. “He’s making his plays, he made the big play on the first goal (against Ottawa), he’ll be fine.”

It isn’t the fact he isn’t on his typical point per game pace but more to do with his risky passes. Through the team’s first 6 games he leads all Rangers’ forwards with 6 turnovers. To his credit, he also leads the entire team in takeaways with 8.

Another concerning factor is the difficulty he’s having getting his shots through. Panarin has team low among forwards with only 34.5% of his shots making it on net. That easily explains his one goal which came on an OT mad scramble against the Leafs.

The question that needs answering is if his early season struggles are due to timing issues, missing Ryan Strome, defenses figuring out how to play him, or all three.

“We need a bit more from a lot of guys, so I’m not going to single out Panarin,” Gallant wisely supported his player. “We had a 4-0 road trip so we’re pretty happy. I’m not worried about individual players. I’m worried about the team and I really liked what we’ve done.”

One thing should be clear, doubting if Panarin will breakout of this “slump” seems pretty silly.

Kaapo Kakko was injured late in the first period at Montreal. The team was still able to rattle off four straight road wins without him and Strome. That’s 1/3 of your top six not in the lineup. Pretty impressive.

Kakko, 20, is on IR which means he has be out at least 7 days. That puts him on target for when the Blueshirts return home to face the Calgary Flames on Monday 10/25.

The Rangers were initially scheduled to be off today but will practice at 12 PM ET at the MSG Training Center. We should get word later if he will indeed play tomorrow night at the Garden versus the Flames. 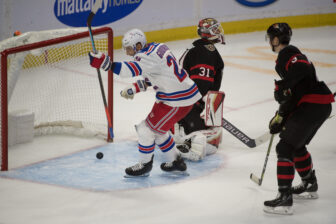 From the Rangers late rally to the Habs finally winning a game this season, here’s all 13 contests recapped. Read More.