The New York Rangers are back in on a Jack Eichel trade. So what changed? The asking price more than anything else. When the Sabres were demanding at least four high end assets in the form of first rounders, many teams balked at the asking price.

While the Blueshirts did have an offer last offseason, the Sabres considered it but declined. From what I could gather back in March, the offer was along the lines of Ryan Strome, Vitali Kravtsov, Zac Jones, and their 2021 first round pick. They eventually backed off for many reasons back in May, and with his neck issues, Buffalo won’t be getting that package again.

Rangers back in the mix for Jack Eichel

Recent reporting by Larry Brooks of the NY Post stated Chris Drury was engaged in talks with the Sabres. He wasn’t sure if it was due diligence or more. Now it appears the Rangers are back in the mix since Buffalo has eased up on their trade demands.

Today, both John Vogl of The Athletic and John Warrow from the AP got Eichel’s agent to go on record. “We are communicating with the team and are heading towards a resolution,” agent Peter Fish replied. With the NHL Draft just weeks away, a trade is imminent.

For more on this story, check out my full article at The Daily Goal Horn here.

The New York Rangers and their social media team are the best in the business. Yesterday, they released this video from Adam Fox on winning the Norris Trophy and having Brian Leetch present it to him.

“It was surreal to find out I was nominated for the Norris Trophy let alone win it,” Fox began. “Brian (Leetch) is an all-time Ranger, a Hall of Famer, his jersey is in the rafters, he’s won some Norris Trophies himself. So for him to present me the award is special.”

Check out our article on Panarin’s 11th hour decision to sign with the Rangers here. 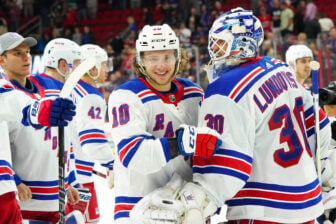