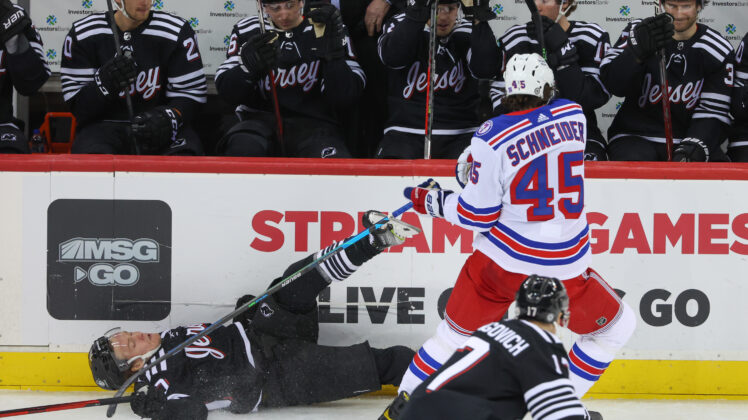 The New York Rangers came out of the gate strong last night against the Devils. Despite the torrid pace, a Jacob Trouba turnover early in the first period led to a breakaway put home by Yegor Sharangovich.

Just like that, the Rangers were down and probably frustrated.

That’s when Braden Schneider decided it was time to take the hard-nosed game that made him WHL Defenseman of the Year last season and bring it to the show.

The Rangers had eight of the first 10 shots in the first period but the Devils tallied first following a turnover at the New York blue line by Trouba, whose pass was intercepted by Sharangovich before the center descended untouched on Alexandar Georgiev and beat him with the backhand at the 6:56 mark.

A fight between Sharangovich and Schneider after the latter leveled Jesper Boqvist near the benches generated the power play that led to the first of back-to-back, man-advantage goals for the Rangers thanks to an instigator penalty.

“It was a good, solid hit,” Gallant said via NHL.com. “He stepped up in the neutral zone and obviously we got the power-play goal off that, so that was huge for us. A little emotion in the game.”

“I think he probably overreacted a little bit,” Ruff said of Sharangovich. “It was a good hit, nothing that was wrong. I’ll never criticize when a teammate comes to defense of another teammate. I think he may have thought [Schneider] jumped when he hit him.”

When Chris Kreider and Ryan Strome were asked about Schneider, they each gushed over not only his play but his maturity.

“He’s been great all year,” Strome said. “For such a young kid, he’s so professional. You never have to worry about him. He’s mature beyond his years on and off the ice.”

“When you say a young guy step up and make a play like that, you could feel the energy on the bench,” he said. “I think guys have been calling him Baby Trouba.”

Schneider, 20, has 9 points in 32 games during his first NHL season.

Tuesday night’s win over the New Jersey Devils moved the Rangers to within two points of first-place Carolina in the Metropolitan Division. The victory also increased their lead over Pittsburgh for second-place by four points.

The Rangers magic number has been cut to just four points after the Islanders fell to the Dallas Stars yesterday.

Should the Rangers beat the Penguins on Thursday, and the Islanders fall in regulation on Friday to the Hurricanes, New York will clinch a playoff berth for the first time since 2016-17.

Recap all 10 games on the NHL schedule for Tuesday at The Daily Goal Horn! A new home for schedule, scores, and rumors. Read more.