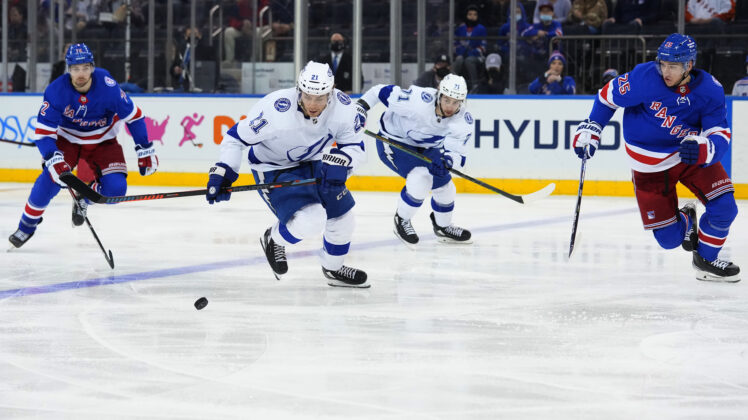 The New York Rangers are back home looking to regain the series lead they held when they were last at Madison Square Garden.

While they may not have two players of their in own, the Tampa Bay Lightning have not ruled out a big offensive weapon.

Although Brayden Point was not officially ruled out for Game 5 he remains doubtful. Regardless, if he doesn’t suit up Thursday at the Garden playing in Game 6 seems more likely.

“I can honestly answer this question with ‘I don’t know,’” coach Jon Cooper said Wednesday. “I’ll find out when I get on the plane, so I’ll have an answer for you tomorrow. But now we’re getting into the point where I don’t know if there will be definitive outs. I’d be surprised if he plays this next game, honestly, but I’m not going to sit here and say he’s out for the series anymore.”

Point, 26, posted 58 points (28 goals, 30 assists) in 66 games. In seven playoff contests, he’s added two goals and two assists. He injured his leg against the Toronto Maple Leafs in Game 7 of the Lightning’s opening round series.

UPDATE: Strome and Chytil in! Point ruled out

Meanwhile, Ryan Strome tried valiantly to get into the lineup on Tuesday night but was unable to get through warmups. Later in that same contest, Filip Chytil took a hit from Victor Hedman late in the second period and could not return in the eventual 4-1 loss to the Bolts.

“I expected [Strome] last night but they’re both game-time decisions,” Gerard Gallant said on Wednesday. “You’ve got to make the right calls for everyone. Last night we made the right call.”

Strome has 9 points in 17 playoff games to date, and Chytil was coming on strong with 6 points in his last 6 postseason contests.

Note: Per the New York Rangers, there will no morning skate today. Gerard Gallant’s pregame presser slated for 6:00 PM ET.

Executives at ESPN and the NHL must be grinning from ear-to-ear every time the Rangers and Lightning square off.

ESPN’s PR department post that the Eastern Conference is drawing in viewers with an average of 2.24M people. That’s a huge improvement over last season’s conference final by a 71% margin.

Overall the playoffs are up 27% in viewership.

Congrats to the NHL and ESPN.

Also Read:
New York Rangers control ECF with 2 out of 3 at home