The New York Rangers had the day off yesterday and will be back to work soon as they head to Dallas for a matinee with the Stars on Saturday. They’ll follow that with a trip to the smallest rink in the NHL, the ASU Arena to face the Arizona Coyotes on Sunday night.

While the Rangers are having trouble scoring lately, they are taking a new approach to solving that problem.

Barclay Goodrow posted some cool photos of himself, along with Artemi Panarin and Ryan Reaves in their Dodge Ball movie costumes.

Goodrow is dressed up as the leader of the Average Joes, Peter LaFleur (played by Vince Vaughn). Panarin dressed up as the villain of the flick, White Goodman (Ben Stiller) and Reaves was Me’Shell Jones (Jamal Duff).

Also seen in these photos is Mika Zibanejad, who dressed up as Rip Torn’s character Patches O’Houllahan.

Want to score? Learn to dodge a wrench!

Dodge Ball: A True Underdog Story came out in 2004 and is one of the funniest sports movies of the decade.

The New York Rangers are having trouble scoring these days. I took a closer look at their shooting woes and noticed that they need to start getting back to creating more shots for tips in front.

You can read more here.

The Blueshirts will also be back at practice today in Tarrytown before they head out to Dallas for another set of back-to-back games.

This will be the team’s third set of back-to-backs. They are 1-2-1 to date with both losses coming in the second game. 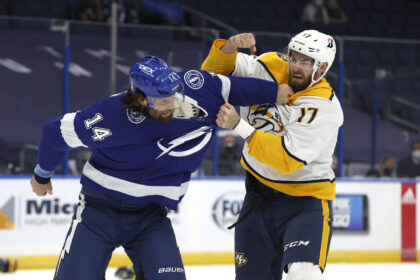