The New York Rangers have hit a pothole on their road back to the Stanley Cup playoffs by going 0-2-2 in the past four games.

During this bad stretch the Blueshirts have only scored five goals and allowed 12.

To compound these issues, the once high-voltage power play has been unplugged going 1-15. The lone goal was scored unassisted by Artemi Panarin against the Columbus Blue Jackets on a two-man advantage thanks to a terrible turnover.

New York Rangers need to mix up their shots

When you look at the last four games, one thing does stand out and that’s the shot counts. Here’s a breakdown:

That’s a +20 shot advantage for the Rangers. It should also be noted in the game against the San Jose Sharks, the team held a 21 to 9 shot edge heading into a third period that started this downfall.

After the loss against the Islanders, head coach Gerard Gallant was asked if he took any solace in posting back to back 40+ shot games.

“Yeah, that’s good,” Gerard Gallant said with a laugh. “The analytics guys are wrong because we lost both those games. Keep shooting the puck. We begged for them to take more shots last year, they just got go in.”

Right now the Rangers are shooting blanks. Over the last four games, their shooting percentage is a measly 3.5% which is well below NHL average of 10.14% to date. On the season, the team ranks 31st in the entire league at 7.4%.

When you dive into the stats further, the Rangers are simply not causing enough traffic in front. That goes especially double on the power play.

Chris Kreider was a force last year with his net front preference en route to a 52 goal season that boasted 17 goals off of tips.

This season, the Rangers have only 2 of their 22 goals off of tips, and 1 on a deflection. At this rate they would finish with about 8 goals on tips. In contrast, they scored 37 times that way in 2021-22 and had 5 deflection goals.

Here’s a breakdown off their shot selections:

The remainder of their shot selections are 6% for backhands and 1% for wrap-arounds.

It needs to start with the power play

The Rangers need to get their power play working. It’s stale and predictable as the desire to continue to feed Mika Zibanejad for his elite one-timer is being defended well.

To further compound the problem, the Sharks provided a recipe for success for all PK units facing the Rangers by being extra aggressive.

That’s why the Blueshirts need to get back to basics and start looking for point shots that Kreider can deflect. If they can’t get that aspect of their game going, Zibanejad’s one-timer will continue to see a lot of defenders cheating towards his side to take it away.

“We need to trust each other,” Zibanejad said. “We have to work though this and that’s the only way. When we do the little things and play the way we want to, more often than not we’re going to get the points.”

It can all start with a more basic power play and some different shot choices.

All data from NHL.com 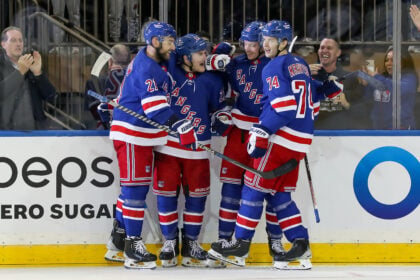