The New York Rangers lineup against the Isles will have a change to it as Vitali Kravtsov is out of action.

Kravtsov was wincing in pain after a hit that looked like he injured his left arm against the Colorado Avalanche on Tuesday. Although he did return to play, Gallant kept him on the bench for the final 5:57 of regulation and OT.

The 22 year-old winger doesn’t seem to have any luck at all this season as this is his second stint on the injured list. He has no points in 3 games this season but played over 10 minutes in the team’s last two games.

In his place, recently recalled Julien Gauthier will be in the lineup making his season debut after being cut at the end of training camp.

Gauthier, 25, has 2 goals in 4 games with the Wolf Pack this season.

Jaroslav Halak will get the nod in goal looking for his first win of the season.

So far this season, the new Rangers backup has not been very good.

“I’m just going to talk about myself,” Halak said after allowing 5 goals on 21 shots in his last start versus Columbus. “I got outplayed by their goalie and I need to be better next game. Hopefully down the road I can help the guys. I wasn’t my best tonight.”

Here’s a look at the lineup for tonight: 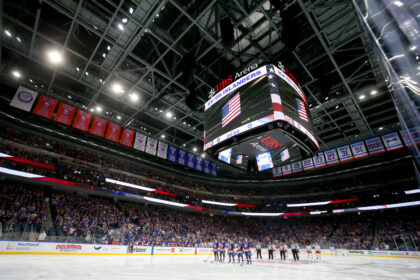