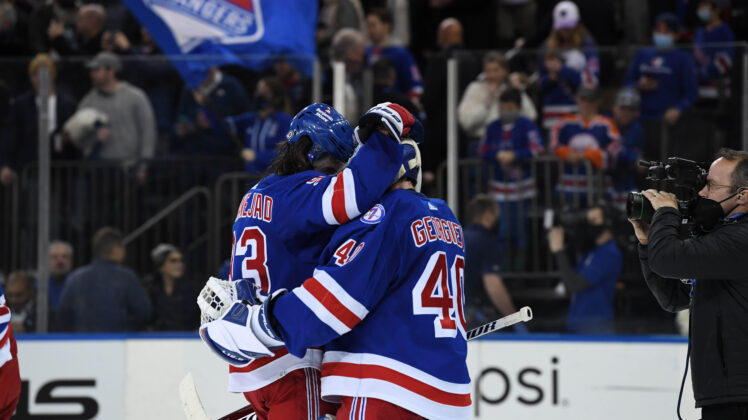 This Wednesday the New York Rangers will host the Toronto Maple Leafs. It signals a new paradigm for the Blueshirts schedule as they will play 26 of their final 43 game at Madison Square Garden. And while the team’s .667 points percentage away from home is excellent they’ve amassed an impressive .733 points percentage on Garden ice.

Per MoneyPuck the Rangers have a 96.1% to make the postseason, but that should go up with the team’s home heavy schedule.

This season, the Rangers are 10-3-2 at home. Gerard Gallant deserves a lot of credit for that as he’s been masterful on the bench with his matchups. For new fans, the advantage of home ice for a coach is the right to make the last change.

A fine example of that was a 4-0 win over the Tampa Bay Lightning on January 2. In that contest, Gallant minimized the exposure of his rookie defense pairing featuring Zac Jones and Nils Lundkvist to the likes of Steven Stamkos and Brayden Point.

Another thing going for the Rangers is how dominant Igor Shesterkin has been at home this season. As the 26 year-old vies for the Vezina Trophy as the NHL’s best goalie, his record at MSG is 7-1-1 with a .948 SV% and a 1.73 GAA.

That’s not all the Blueshirts can lean on at the World’s Most Famous Arena. When scoring first they are undefeated (7-0-0). The team is also 10-0-2 when leading or tied heading into the third period.

The Metro Division has boiled down to four teams all vying for first place with just three points separating them. Having a home heavy schedule should help the Rangers in the second half.

“He’s not cocky. He’ seems to be one of the guys,” Gallant said of Schneider’s calm and poise. “He’s been here four or five days and he walks in and you know he’s excited to be in the NHL but you don’t feel that.”

As to why Gallant believes he’s adjusted so quickly, he credits Schneider’s time at the World Championships with Team Canada. A tournament they won Gold together.

“He was there with us for three weeks,” Gallant explained. “I got to know the kid pretty well and all the older players took him under their wing and helped him out. I think that was huge for him coming into the NHL for sure.”

The head coach, who had interviewed for the Rangers vacant coaching job prior to heading to Latvia admitted that he took special interest in Schneider. It was something the kid noticed too.

“I got to know (Gallant) quite well (at the World Championships),” Schneider said upon his call up. “I was always talking with Gerard and we built up a pretty solid relationship.”