The Rangers held another practice in preparation for their final preseason game tomorrow against the Islanders in Connecticut. Ryan Reaves did not practice with a lower-body injury and is questionable to start the season.

Gerard Gallant was asked again about the status of Ryan Reaves and confirmed it is day-to-day. Whether or not he can play on October 13th, against the Washington Capitals remains to be seen.

“When it happened it didn’t look good but I think it’s day-to-day for us,” the coach said. “When he left the game I said, ‘no,’ but the last couple of days it’s going in the right direction. I can’t really say, but it’s going to be real close – from the info I got.”

The New York Rangers have announced they will retire Henrik Lundqvist’s iconic #30 in a ceremony at Madison Square Garden on Friday, January 28, 2022.

The 39 year-old goalie ended his NHL career this summer with a record of 459-310-96, a .916 SV% and a GAA of 2.43 with 64 shutouts. Simply remarkable numbers. Lundqvist will forever be remembered for carrying the team on numerous occasions, in particular the 2014 Stanley Cup run that fell short. He is and always will be one of the best Blueshirts of all-time.

So how is he fairing with retirement? NHL.com’s Dan Rosen caught up with him for a feature this week.

“I feel good,” Lundqvist said in the interview. “Off to a really good start back in New York with the kids back in school. I’m pretty active. Playing a little tennis, moving around. I can’t push it 100 percent and that will take some time before I can do that, but overall I feel really good with where I’m at right now. It was a hard decision to walk away, but at the same time I knew it was the right decision.”

Henrik also talked about his excitement for his ceremony but sees it as an opportunity to thank the family, friends, and the fans.

“I look forward to that a lot, to let everybody know how much I appreciated everything for so many years. To have my closest friends and family there, really it’s hard to take in, but it’s a great feeling for sure,” he explained. “Obviously, over the last year, especially with what I’ve been through, I have been thinking a lot and reflecting a lot, and I feel so much gratitude for my entire experience here in New York and the Rangers and the organization, the city, the fans.”

Georgiev was involved in some trade rumors this summer. Rumblings stated he was looking for an opportunity to be a starter elsewhere, but that was shot down by his agent.

However; Frank Seravalli who initially reported the story is pretty adamant that Alexandar Georgiev is interested in a change of scenery and that the Rangers are looking to move him.

Today, the goalie spoke about it to the press.

“As you know the rumors were not true, I don’t know where that came from,” he said. “You can get dealt pretty much as a player without a no-move clause, so I just worked as usual and tried not to think about it and super happy to be back.” 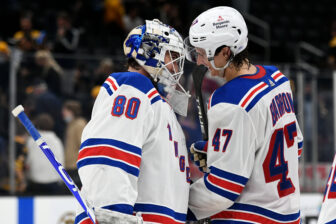 NHL Rumors: Rangers will use Eichel trade as bargaining chip with Zibanejad

So why so much renewed talk in Eichel and the Rangers? Read more here.