When you stop and think of all the great New York Rangers goalies, two names often come up and coincidently their numbers are retired in the MSG rafters.

Eddie Giacomin and Mike Richter played over 600 games for the Rangers (608 & 666 respectively). Eddie finished with 289 wins in his career and Richter with 301.

Now that Henrik Lundqvist has officially retired, his name and iconic No. 30 will join them in a ceremony this upcoming season.

Let’s take a stroll down memory lane and celebrate these great netminders.

Mike Richter never won a Vezina Trophy or Olympic Gold, what he did win was the Stanley Cup. Something only 4 other Ranger goalies in franchise history won before him. In 1928 Lorne Chabot was the man until an eye injury in the finals made Lester Patrick don the pads for the franchise’s first ever Championship. Then Andy Aitkenhead and Dave Kerr won it 1933 and 1940 respectively.

It took 54 years for someone that special to come along and Richter did it in grand fashion. At the age of 27, Richter amassed a record of 42-12-6, with a 2.57 GAA and .910 save percentage. Along the way he would win MVP of the 1994 All-Star game, held at MSG. He topped that regular season with a 16-7 record, 2.07 GAA and .921 save percentage in the playoffs to win the Stanley Cup. He also notched what may be the greatest moment in NYR history when he stopped Pavel Bure on a penalty shot in game 4.

Mike Richter had just done the impossible and was poised to do more. In 1996 versus the heavily favored Canadians, he would backstop Team USA to a World Cup Championship and then an Olympic Silver in 2002. Sadly, his career was hampered by a devastating knee injury and a concussion that ended his career after only 13 games in 2002. Yet, he finished with 301 wins, 2.89 GAA and a .904 save percentage in the regular season. His playoff totals were 41 wins, 2.68 GAA and a .909 save percentage, but that giant silver Cup looms biggest.

The number 35 was raised high to the rafters on February 4th, 2004, almost as high the spirits of Rangers fans on June 14th, 1994. That night Richter said “Over this last year, any sense of loss has been replaced with feelings of gratitude and joy, and the realization that this time spent here was nothing short of an amazing gift.”

Eddie Giacomin is still adored by the Rangers’ faithful. His number 1 hangs proudly in the Garden rafters. A Hall of Famer, Giacomin finished with a 2.82 GAA and 54 shutouts. Eddie won the Vezina Trophy in 1971 but never captured the Stanley Cup.

The highlight of his career may very well be his tearful return to the Garden as a member of the Detroit Red Wings. Rangers fans rained down boos at their own team while chanting “Ed-die! Ed-die!” Giacomin would win that game for the Red Wings, but he never lost the hearts of the Garden Faithful. In a biography video, Giacomin looked back on his return and recalled “That was one heck of an experience that will never go away. The New York Rangers crest is buried in Eddie Giacomin’s heart.”

Henrik Lundqvist belongs high in the Garden’s ceiling. I don’t care to debate if he is the greatest of all New York Rangers goalies, he simply is one of the best players to ever pull the sweater over his head. His Gold and Silver medals prove his international greatness. Lundqvist capturing the 2012 Vezina Trophy, along with every heart-stopping save in his 15 year NHL playing career is enough for me.

The 39 year-old goalie ends his NHL career with a record of 459-310-96, a .916 SV% and a GAA of 2.43 with 64 shutouts. Simply remarkable numbers. Lundqvist will forever be remembered for carrying the team on numerous occasions, in particular the 2014 Stanley Cup run that fell short. He is and always will be one of the best Blueshirts of all-time.

The King finishes his career leading the Rangers in the following categories for goalies: 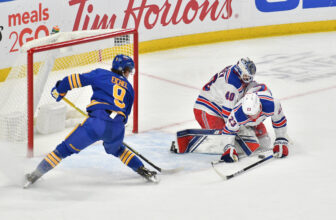 Lundqvist was close to a comeback

Find out just how close and what derailed it. Read here.