Rangers should look at Anton Khudobin trade if he clears waivers

The New York Rangers are said to be in the market for a new backup goaltender for Igor Shesterkin next season. Of course, there’s no reason not to address it earlier if the right opportunity presents itself.

That may have just happened as the Dallas Stars have placed 2020 Stanley Cup playoff hero Anton Khudobin on waivers.

Khudobin, 35, has struggled this season with a 3-3-1 record to go with a below average SV% of .873 and GAA of 3.73. Dallas has been getting great goaltending from Braden Holtby and Jake Oettinger making Khudobin expendable.

The Stars have been looking to move him for awhile but have yet to find a taker. One report said that conversations took place with the Sabres but no deal was reached.

Khudobin, has one year remaining at $3.33M. If he clears waivers and the Stars are willing to eat 50% of his cap hit, several teams may find him attractive.

For the netminder, this opportunity has helped him raise his value around the league. It’s been well documented that he’s been on the block and hasn’t received much interest. Although he’s denied it, Georgiev has been looking to get out for quite awhile.

Georgiev’s current deal is $2.425M and his qualifying offer must be at least that much. With the cap squeeze on next season, he will most certainly be a cap casualty. His value at the trade deadline would be higher than as an expiring RFA at the draft.

Of course, Drury can’t trade him without a viable backup and he may have one available at the right price in Khudobin. 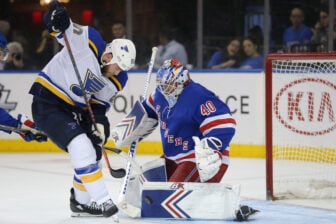 The Oilers are struggling and have three areas of need to fill via trade. Plus latest on Olympics. Read more here.