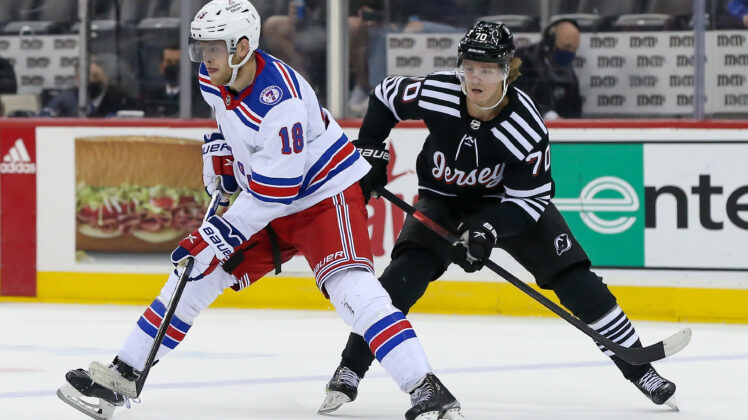 The New York Rangers looked “mentally tired” per head coach Gerard Gallant after they were drubbed 7-4 by the Devils in New Jersey.

That was Gallant taking it easy on his charges, but the fact is they played stupid hockey. After the game, two of the team’s leaders took to the microphone and admitted as much.

Ryan Strome scored a goal to start the third period cutting the lead to 5-3. The team was looking to mount a comeback, but could not stop making mistakes that caused turnovers.

“We had a great first, everyone was in a good mindset, and I think it was just mental errors, some stupid hockey by everyone,” Strome said. “Especially guys that usually don’t make mistakes, myself included. Just mistakes that cost us. Weak hockey and soft hockey. We know what it takes to be successful…we’ll learn and move on.”

Chris Kreider, who recorded his 42nd goal of the season concurred with his fellow alternate captain.

“Like Ryan said, a lot of uncharacteristic things tonight from guys who don’t normally do that. I certainly made some boneheaded plays,” Kreider admitted.

The team’s leading goal scorer pointed out a 2 on 1 shorthanded play that could’ve cut to lead to 5-4 in the third period in particular.

“I always shoot that, every practice whenever he gives me that, so no idea why I tried to give it back to him,” Kreider said. “They come down and it ends up in the back of our net. That could be the difference between a one-goal game and a three-goal game. They jumped on our turnovers and we gave them a lot of them.”

The Rangers had a new look with deadline acquisitions Andrew Copp, Tyler Motte, and Justin Braun the lineup. When Kreider was asked if the fact there were so many new players in the lineup being a factor he dismissed the notion.

“I thought those guys worked incredibly hard, hit the ground running,” he explained. “I think collectively we just got away from the things that we did well the last couple of games. We had a good first period and then just fell asleep at the wheel.”

Andrew Copp made an impressive debut for the New York Rangers picking up two assists.

“Getting into a game is probably the best way to get to know the guys a little bit. Wear off the (newness) of it and get into the flow as quickly as possible,” he said before the contest against New Jersey.

On the Rangers second goal of the game by Adam Fox, Copp was moved to the top line and took the draw in place of Mika Zibanejad. A clean faceoff when back to the line’s usual center set up the tally.

Late in the third, with Panarin still a bit shaken up from a center-ice collision, Copp redirected a point shot on goal that Kreider corralled and put home.

The Golden Knights traded Evgenii Dadonov at the deadline, but were they allowed to? Read more.