Former New York Rangers coach John Tortorella didn’t hold back when giving his thoughts on the NHL All Star Game.

The current coach of the Philadelphia Flyers was asked about Travis Konecny, arguably his best player not making the team. Torts replied in his typical uncensored fashioned.

“I don’t even worry about that [expletive],” Tortorella responded. “The whole game, the whole weekend, I don’t even it watch it. I think the whole thing has turned into a– well, I’ll just leave it at that. I really don’t care.”

Torts no fan of All Star Game

According to last year’s TV ratings, Torts may not be alone in his opinion. Per Sports Media Watch, the 2022 All Star Game in Vegas was the lowest viewed since 2009.

Over 400 fans voted on a Twitter Poll asking if they agree with John Tortorella’s opinion with 80% sharing his sentiments.

So why are fans not flocking to their TV screens to watch the NHL’s annual showcase of stars? Maybe it’s because the league has turned it into a giant gimmick. For example, the skills competition was a much more serious event when originally conceived. Today, you have Trevor Zegras dressing up in a full Dodge Ball: The Movie costume to take his shot.

While it’s fun to watch, many traditional hockey fans aren’t interested. And per Sportsnet’s Jeff Marek, the league is looking at adding a dunk tank on the beach to the skills competition since All Star weekend is in Sunrise, Florida this February.

Yes a dunk tank! On the beach, where apparently players will shoot at targets to dunk an opposing player. It sounds amusing but isn’t the game played on ice? Forgive me for the sarcastic rhetorical question.

Those things aside, the biggest issue for some is that players like Auston Matthews and Leon Draisaitl are not even going to the All Star Game unless fans vote them in. That’s because the NHL initially selected one player from each team because they believe it will draw more interest and viewers.

So those guys can’t go because the Leafs have Mitch Marner and the Oilers have Connor McDavid already going. Yet the Flyers Kevin Hayes will be there despite having 11 less points than Matthews in the Eastern Conference as an example.

The fact is, viewership has been down for the NHL All Star Game since 2004 when it drew in an audience of over $2 million people. That’s when the best players from the East beat the best from the West 6-4 in a regular hockey game.

For the last few years, the NHL has gone to a 3 on 3 tournament with each division playing against one another. Maybe the league should consider going back to the old East vs West format in a standard game again? Just something to think about.

It looks like one former Rangers player is not a big believer in Alexis Lafreniere. In a recent interview with TVA Sports in Montreal, Ron Duguay thinks the team should trade him for a valuable piece to win a Stanley Cup this year.

“I watched it for two years. I don’t think he could be better than a 20-goal scorer,” Duguay said. “Not because I don’t like him, but because he lacks speed. I figured he’s a player they might be looking to trade.”

You would think that Duguay would have a little more understanding being a first round pick for the Blueshirts (13th overall) back in 1977. However, the good news is he doesn’t the run the Rangers and the organization still thinks very highly of the first overall pick from 2020.

“Predictably, there were teams that checked in with the Rangers last week after his healthy scratch,” Pierre LeBrun reported. “The reality is the Rangers told those teams, ‘We still believe in this young man,’ and the Rangers have told the same to Lafreniere himself. They hope this is a good reset and they very much believe in his longterm potential. So for now he’s certainly a Ranger.”

Lafreniere is just 21 year-old and has been playing on very good Rangers team since being selected. Both Artemi Panarin and Chris Kreider are rightfully ahead of him on the depth chart at left wing. Despite not getting top six minutes or first unit power play time, he’s still producing decent numbers.

This season, Lafreniere has registered 18 points in 40 games. All but one of those points is at even strength. While many do not feel he’s living up to the designation of being a first overall pick, the winger didn’t walk into a similar situation as Jack Hughes, who landed on a bottom feeding Devils squad.

New Jersey’s talented center was thrusted into a top six role and given top power play units from the moment he stepped on the ice. Anyway watching closely also saw that playing defense was optional for Hughes. Of course, as the team has improved, he’s also started to work on the defensive side of the game.

So while Hughes is currently on pace for 100 points in his fourth NHL season, he’s yet to suit up for a playoff game. Lafreniere played in 20 last year in his sophomore campaign and was solid with 9 points as a third liner.

Not all situations are equal and it would be foolish for the Rangers to give up on Lafreniere this soon. 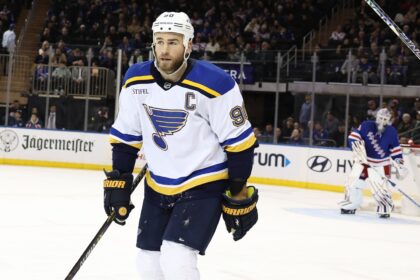