The New York Rangers will kick off another 4-game homestand against the Philadelphia Flyers on Tuesday night at the Garden.

They’ll also look to pick up their third straight win after a sweep of back-to-back games over the weekend.

The Rangers are coming off a 3-2 win at Arizona on Sunday, achieved when Mika Zibanejad’s power-play goal off assists from Chris Kreider and Artemi Panarin with 7:04 left proved to be the difference.

Meanwhile, the Flyers are looking for a bounce-back win after falling in overtime to the visiting Carolina Hurricanes 4-3 on Saturday for their second loss in their past three games.

The Rangers got a much-needed off day on Monday after beating Arizona, which came after a 6-3 win at Dallas a day earlier. The Rangers also played back-to-back games earlier in the week, when it followed a 3-2 loss to the visiting Colorado Avalanche on Tuesday with a 3-0 setback at the New York Islanders on Wednesday.

“It’s never easy. Back-to-back games, this is the third one already in 10 games, but you know they found a way,” Gerard Gallant said Sunday. “I thought they (Rangers) played a great first period, we really played a lot in their zone and then, after that, they took it to us a little bit but overall I thought we played a good, solid game from everybody.”

Filip Chytil suffered an upper-body injury against the Columbus Blue Jackets two Sunday’s ago and was ruled out of all four games last week. He made a surprise appearance at practice last Friday, but the Rangers opted to hold him out.

New York will skate today and provide an update on Chytil’s status for tonight’s matchup against the Flyers. The 23 year-old center has 2 goals and 1 assist through six games.

Vitali Kravtsov was injured on Saturday after going hard into the boards versus the Dallas Stars and appearing to hit his head. The Rangers stated he was day-to-day after the game, no additional update has been provided. He has no points on the year.

Igor Shesterkin is expected to make his third straight start.

After finishing in last place in the Metropolitan Division in 2021-22, the Flyers hired John Tortorella this past summer. They did so with the intention of turning around the narrative the Flyers were easy to play against.

“Before we even step on the ice, situations and standards and accountability in the room is forefront,” Torts said at training camp. “You can’t get squat done on the ice until you get your room straightened out, and I think we have a little bit of work to do there.”

Philadelphia has gotten off to a 5-2-1 start, thanks to their strong goaltending. While their 24 goals scored rank last in the division, they’ve allowed a division-low 21.

Hart should be tested by the Rangers. Panarin entered the week tied for third in the league with 16 points (five goals, 11 assists), while Zibanejad’s six goals were tied for eighth-most in the NHL. Adam Fox’s nine points (two goals, seven assists) were tied for third among defensemen.

Rangers goalie Igor Shesterkin (5-0-2) has a .913 save percentage and allows an average of 2.55 goals per game. He’ll likely be challenged by the Flyers’ Kevin Hayes, who has a goal and nine assists, while fellow forward Travis Konecny has four goals and five assists. 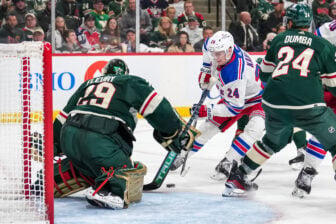