Filip Chytil, who took an elbow to the head at the beginning of the first period in Sunday’s 5-1 loss to the Columbus Blue Jackets will be sidelined at least a week per multiple reports.

Just two minutes into the contest, Cole Sillinger appeared to hit a turning Chytil up high. Video review made it difficult to ascertain if there was any intent, but head coach Gerard Gallant dismissed that notion after the game.

“He’s day-to-day and we’ll assess him tomorrow to see how he is,” Gallant updated on the MSG postgame. “I don’t think it was vicious play. I don’t think he meant to hurt him, but he still got him with a shoulder to the head. But I don’t think there was any intent at all.”

Chytil was down for a bit and being attended to by trainer Jim Ramsay before leaving for the dressing room. Sillinger did not receive a penalty on the play.

Filip Chytil out at least a week

Coming into the contest, Chytil had 2 goals and 1 assist through five games while averaging 14:52 of ice time.

The young center was playing well before this injury and will miss all four games the Rangers are set to play this week.

According to reports from practice today, it appears Barclay Goodrow will center the third line and Jimmy Vesey will return to the lineup after being scratched on Sunday.

Gustav Rydahl, has a good chance of being called up from the Hartford Wolf Pack.

Rydahl, 28, signed a one-year, one-way contract over the summer as a free agent out of the SHL. The fact that he’s waivers exempt makes it easy for the Rangers.

“We liked everything he brought,” Gallant said. “For a guy we didn’t know at all, I was very impressed with him. He might be a guy that’s going to see some time up here.”

In his four preseason contests, he registered an assist and picked up two shots. Last season for Färjestad BK of the Swedish Hockey League, he recorded 15 goals and 15 assists for 30 points. He has 1 assist in 3 games with the Pack this season.

We will update this article after Gallant speaks with the media. 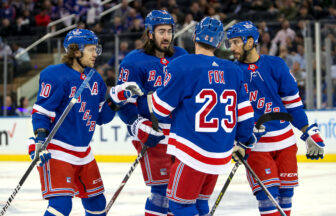