They enter this week with a record of 3-2-1 after several poor performances. Unfortunately, the defensive lapses that started with a big win against the Minnesota Wild in game two of the season have now started to impact the results.

On Monday of last week, they were able to use their power play and offensive prowess to beat the Anaheim Ducks 6-4. But an OT loss to the San Jose Sharks and a regulation defeat to the Columbus Blue Jackets were hard to take.

“We were far from good enough, we were slow, I didn’t like the way we played,” Rangers coach Gerard Gallant said on Sunday night. “The speed of out game wasn’t good. The first game of the season against Tampa Bay was a solid game. Strong, competitive, manage the puck well, and we haven’t done that since.”

Mika Zibanejad had two goals and two assists for New York in a win against visiting Anaheim. Artemi Panarin had a goal and three assists, Adam Fox contributed three assists, Vincent Trocheck added a goal and an assist, and Igor Shesterkin had 18 saves for the Rangers, who went 3-for-4 on the power play.

After the game, Zibanejad acknowledged that the team could’ve played better

“There’s an understanding we need to work hard and do the little things right,” Zibanejad said. “There’s room for improvement but so far so good.”

Erik Karlsson scored 49 seconds into overtime as visiting San Jose beat New York for its first win of the season.

After Tomas Hertl won an offensive zone faceoff from Vincent Trocheck, Karlsson gained possession in the middle of the slot, skated around New York star Artemi Panarin and dished the puck to Timo Meier while falling to the ice. Instead of taking the shot, Meier went behind the net and found the defenseman wide open on the right side for the game-winner into the vacated right side of the net.

Prior to the OT goal, the Sharks completely outworked the Rangers in third period and finished with a 16-2 shot advantage. It left Gallant beside himself afterwards.

“I was pretty happy in the first two periods,” Gallant said. “But that third period I have no idea where that game from. A total collapse. Embarrassing really.”

Filip Chytil and Artemi Panarin were the Rangers goal scorers in the contest.

For all the talk after the games against the Ducks and Sharks to be better, the Rangers posted an absolute dud to close the week.

Artemi Panarin scored for the Rangers on a 5 on 3 man advantage. They have now lost two in a row. Jaroslav Halak stopped 16 of 21 shots for New York.

“I’m just going to talk about myself,” said Halak. “I got outplayed by their goalie and I need to be better next game. Hopefully down the road I can help the guys. I wasn’t my best tonight.” 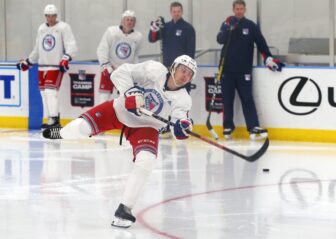 The New York Rangers will play four games this week including two back-to-back sets. On Tuesday, the team will close their four game homestand with a match against the Colorado Avalanche before hitting the road for three straight starting with the New York Islanders on Wednesday.

This won’t be an easy week for the Rangers. Although it appeared they were on their way through an early stroll in the schedule last week, it didn’t turn out as planned. Gerard Gallant is going to need to stress to his team the need to get back to playing hard-nosed and simple hockey.

It they can start off on the right foot with a win against the defending champs, that momentum may carry them for the week.

Of course, even if they do win, they’ll need to bring a high compete level the next night against the rival New York Islanders. They are an angry and frustrated team which will only make that matchup tougher.

The Rangers will get some time off before they head to Dallas and face Nils Lundkvist, who they traded before the start of the season. He will be looking for some form of revenge. The young defenseman has 3 assists in 5 games with the Stars to date.

Finally, the team will face the lowly Coyotes in Arizona. If they lose that one, I don’t think anyone will have much good to say.

Rangers center Filip Chytil took an elbow to the head from Columbus’ Cole Sillinger and was knocked out of the contest just two minutes in on Sunday.

“He’s day-to-day and we’ll assess him tomorrow to see how he is,” Rangers coach Gerard Gallant said. “I don’t think it was vicious play. I don’t think he meant to hurt him, but he still got him with a shoulder to the head.”

Catch up on the rest of the NHL here.