The NY Rangers prospect pool is not what it used to be because players like Alexis Lafrenière, K’Andre Miller, Braden Schneider, and Zac Jones are all up with the big club.

That doesn’t mean the Rangers don’t have some talented young players in their pipeline coming up.

Othmann, 19, is tied for first in the OHL for goals with 8. Last night, Othmann registered two assist to up his point total to 17. That’s good for second in league scoring, 4 points behind Ty Voit.

The Rangers first-round pick from the 2021 Draft has 8 goals and 9 assists in 10 games for the Flint Firebirds on the year.

The Rangers selected the 18 year-old two-way center in the third round of the 2022 Draft. Entering this season, the Soo Greyhounds named him captain and he’s leading them in the room and on the ice.

In 9 games, McConell-Barker has 4 goals and 4 assists including this beauty against the Ottawa 67’s.

Matthew Robertson, 21, was selected by New York in the second round of the 2019 Draft. At 6-4 and 201 pounds he has the size to play in the NHL but failed to impress management this past training camp.

In his one game of preseason action against Boston, Robertson played 18:37 but failed to register a single hit or block.

The Rangers opted to send him down to the Wolf Pack where he picked up 11 points in 65 contests last season. So far in three games he leads the team with 4 points (all assists). 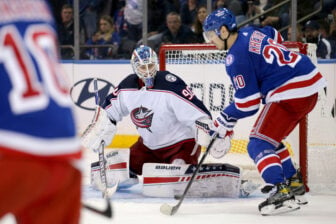