They enter this week with a record of 5-3-2 and start another 4-game homestand which concludes next week against the New York Islanders. Things will get tougher as they’ll play the Philadelphia Flyers, Boston Bruins, and Detroit Red Wings. All three teams are off to a good start.

This past week had the Rangers play in two sets of back-to-backs. With the offense sputtering despite throwing 40+ shots against the Colorado Avalanche and the Islanders. They managed just two goals and it came in the shootout loss to former backup Alexandar Georgiev followed by an Ilya Sorokin shutout the next night.

“We need to trust each other,” Mika Zibanejad said after the shutout. “We have to work though this and that’s the only way. When we do the little things and play the way we want to, more often than not we’re going to get the points.”

The Rangers center proved to be right as they scored 9 goals in their next two games against the Dallas Stars and Arizona Coyotes to finish the week on a strong note.

Alexandar Georgiev made a season-high 44 saves in his return to New York and then made three more in a shootout as Colorado beat the Rangers.

Evan Rodrigues netted the game-winning goal in the fourth round of the shootout against Igor Shesterkin as the defending Stanley Cup champions survived blowing a pair of one-goal leads.

“It was a good game,” Shesterkin said afterwards. “One goalie saved a shot and the other one missed a shot. That’s the difference.”

The Rangers got goals from Barclay Goodrow and Adam Fox in contest.

Kyle Palmieri scored twice and Ilya Sorokin stopped all 41 shots he faced for the New York Islanders, who beat the Rangers 3-0 at UBS Arena.

Sorokin, who improved to 3-1-0 against the Rangers, recorded his 11th career shutout and left the Rangers shaking their heads.

“You just keep working and doing the things you’re doing,” Gallant said. “You can’t get frustrated when it’s only 8 games into the season. You want to score, but some nights they don’t get in. You just keep at it and they’ll stay going in.”

Zac Jones scored the tiebreaking goal in the third period to help Rangers beat the Stars an end a 4-game losing steak (0-2-2). For the young defenseman it was also his first career goal in the NHL.

“I saw Vinny had some space, I rushed to the net and luckily it went in,” Jones said. “It was great to get that first one and to help the team get a win, it meant more than the first goal for sure.”

Igor Shesterkin made 30 saves for the Rangers.

Unfortunately, with 7:35 remaining in the second, Vitali Kravtsov skated hard for a loose puck and appeared to lose his balance. As he went hard into the boards with the Dallas defender, he appeared to hit his head hard on the wall.

He left the game and has been ruled out by the Rangers with an upper-body injury.

Mika Zibanejad scored the tiebreaking goal on the power play with 7:04 remaining in the third period as Rangers beat the Yotes to sweep the weekend.

Zibanejad scored his sixth goal of the season, and fifth on the power play, 27 seconds into New York’s second man advantage late in the game. The Rangers moved it rapidly around the ice with Artemi Panarin finding Chris Kreider down low. He made a deft deflection pass to Mika, who shot it over a sprawling Connor Ingram. Alexis Lafrenière also notched a goal in the game.

Artemi Panarin celebrated his 31st birthday with a goal and two assists to lead the Blueshirts. Igor Shesterkin stopped 18 of 20 shots, playing and winning in back-to-backs for the first time since 2020.

“He looked great. Might do it again someday, you never know,” Rangers coach Gerard Gallant said of Shesterkin playing in consecutive games. “It’s never easy, the back-to-back games … but it was a good, solid game by everyone.” 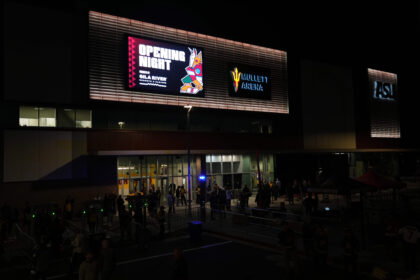 The New York Rangers will play three games this week of their 4-game homestand on Garden ice.

On Tuesday, the team will open against the surprisingly good Philadelphia Flyers. The league-leading Boston Bruins will follow on Thursday and the Detroit Red Wings close out the week with an early game on Sunday.

This is going to be a difficult week for the Rangers because all three teams are hard to play against. On top of that, they’re all well above .500 with the Bruins probably being the best team in the NHL to start the season.

New York will need to keep tightening things up defensively and limit high-danger chances against Igor Shesterkin, who should start at least the next two games. Jaroslav Halak could draw the Red Wings on Sunday.

Getting off to a good start will be key and the recent Rangers reunion tour continues with Tony DeAngelo and Kevin Hayes coming in with the Flyers. Old coach John Tortorella will be behind the bench so you can expect some fireworks to start the week.

Filip Chytil was able to return to practice on Friday but didn’t feel well afterwards and didn’t make the trip. He could suit up this week.