The New York Rangers went into Dallas to take on the red-hot Stars and goalie Jake Oettinger.

After seeing their power play go on-the-fritz (1-15), it scored two huge goals and sparked the Blueshirts offense as they doubled up the Stars on the road snapping a 4 game losing streak (0-2-2).

The hero of the game turned out to be young defenseman Zac Jones, who finally rejoined the lineup after several healthy scratches to score his first NHL goal.

“Fortunately for us we got the fourth goal and it was huge,” Gerard Gallant said. “Jones joined the rush like we talked about. He filled in that slot and made that shot. Good for him to get his first goal and I’m real happy for him.”

The Rangers got off to a bad start and paid for it just 1:09 into the game. Mason Marchment was left all alone in the slot and he quickly converted a Tyler Seguin feed.

Chris Kreider tied the game a little over 7 minutes later. Braden Schneider’s point shot went wide, but it was Kaapo Kakko’s quick hands that made the goal happen. Kreider’s tap in goal was his third of the season and his first since he scored twice in the team’s second game of the year against the Minnesota Wild.

The Rangers got a scare with 17 seconds left when Ty Dellandrea skated through the crease and tripped Igor Shesterkin hard. Last year’s Vezina winner laid on the ice in pain for a few seconds before regrouping and staying in the game.

A roughing penalty by Artemi Panarin on Dellandrea negated a potential power play.

Vincent Trocheck got the Rangers on the board early in the middle frame in a nice set up by Mika Zibanejad. On the play, it was the hard work of Kakko that kept the puck in and back to Adam Fox to set things up.

Unfortunately, the lead lasted all of 29 seconds as Roope Hintz knotted it right back up with Jacob Trouba a step behind on the play.

Stars’ goalie Jake Oettinger left the game with 13:37 to play in the period due to a lower-body injury. He was replaced by Scott Wedgwood for the remainder of the game after stopping 8 of 10 shots.

With 7:35 remaining in the second, Vitali Kravtsov skated hard for a loose puck and appeared to lose his balance. As he went hard into the boards with the Dallas defender, he appeared to hit his head hard on the wall.

He left the game and was ruled out by the Rangers with an upper-body injury.

New York would regain the lead off another nice power play set up. This time it was Zibanejad converting a sweet feed from Panarin right in front for a 3-2 lead at 14:18 mark.

Rinse, wash, and repeat as the Rangers gave up the lead again. This time it was Jason Robertson off a botched face-off that was won by Barclay Goodrow. As the Blueshirts fumbled with the puck, he found it and quickly snapped it by Shesterkin.

The Rangers tightened things up in the third and finally let the game come to them, much like they did when they were winning.

New York was rewarded with two quick strikes and then a delayed penalty tally to blow this one open.

First, Julien Gauthier’s hustle helped start the play where Zac Jones snuck in from the point to convert a Trocheck set up. It was Jones’ first goal in the NHL and the game winner.

“I saw Vinny had some space, I rushed to the net and luckily it went in,” a joyous Jones said. “It was great to get that first one and to help the team get a win, it meant more than the first goal for sure.”

Then just 20 seconds later, Gauthier’s speed caught the Stars flatfooted as he was able to slip one by Wedgewood. Sammy Blais and Zac Jones recorded the assists.

Finally, Trocheck took a great feed from Zibanejad and blasted it by Wedgewood on a delayed penalty. Alexis Lafrenière recorded an assist on the play.

The game ended with the Rangers on the PK, after Barclay Goodrow reminded Dellandrea not to run into Shesterkin again. No goal was scored and the Blueshirts won the special teams battle by going 2/5 on the power play and going 4/4 on the PK. 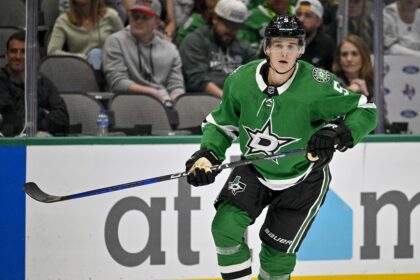