The New York Rangers became the second team to visit the 5,000-seat Mullett Arena at Arizona State University, the temporary new home of the Arizona Coyotes.

After nearly two decades of a tumultuous relationship with the city of Glendale, Ariz., the Coyotes moved to the multipurpose venue at Arizona State University for at least three seasons, starting this fall.

While photos of the dressing rooms that surfaced online showed a less than adequate look befitting an NHL club, the overall consensus from the Rangers on the experience was positive.

“This room is a little poo poo. It’s a little cold in here, too. Not gonna lie.” Ryan Reaves said via The Daily Faceoff. “It’s a weird setup.”

A lot of the good vibes for the Rangers probably came from the fact they were able to walk away with a 3-2 win.

“I know it was only 5,000 seats in here but I didn’t notice it during the game,” Gerard Gallant said. “The atmosphere was good and I thought everything was great.”

Many of the players noted that the intimacy with the crowd was a lot fun. Especially the very loud dueling chants of “Let’s Go Rangers” vs “Let’s Go Coyotes.”

One thing that really stood out was the ice conditions and Reaves, K’Andre Miller, and Alexis Lafrenière were all very complimentary.

“They kept [the ice] in good condition for when we got out there each period, it felt pretty fast,” Miller added. “Fun atmosphere out there.”

In 13 games, the Blueshirts first round pick from 2021 has 23 points which is good for second in the league (1 point behind Ty Voit). His 10 goals rank him first in the OHL. Othmann registered his 10th tally last night on a breakaway.

Last year, Othmann was incredible by scoring 50 goals and 97 points for the Flint Firebirds in 66 contests. 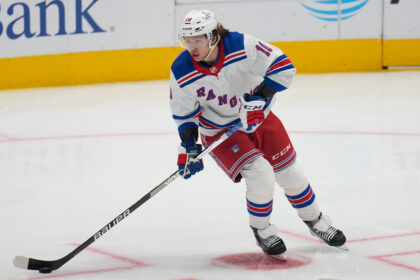