Get all the info you need on the NY Rangers game tonight throughout the 2022-23 regular season.

In this article, we track every New York Rangers game as well as highlight other key dates throughout the season. We also also will provide you broadcast information prior to each game.

The New York Rangers open the 2022-23 schedule with an Eastern Conference Final rematch against the Tampa Bay Lightning on October 11 at Madison Square Garden. Puck drop for the home and season-opener is slated for 7:30 PM. 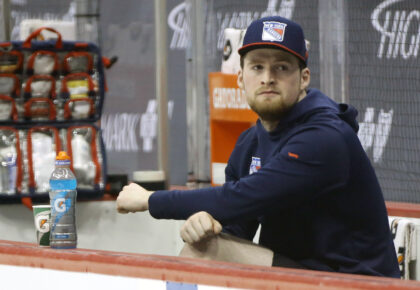 The NHL released their full regular season schedule with key dates in July. Here are the highlights.

The regular season starts of with the NHL Global Series in Prague, the capital city of Czechia. The Nashville Predators and San Jose Sharks will compete in two games, the NHL’s first in Europe since 2019.

The Global Series also will feature games in Tampere, Finland on Nov. 4-5 between the Avalanche and Columbus Blue Jackets.

The Winter Classic will be held at Fenway Park in Boston, where the Bruins will host the Pittsburgh Penguins (2 PM ET).

The Florida Panthers will host this seasons festivities with the All-Star Skills competition held on Feb. 3.

The Carolina Hurricanes will host the Washington Capitals at Carter-Finley Stadium on the North Carolina State campus (8 PM ET).

The NHL Trade Deadline will be earlier this season as the schedule start to return to normal. Last season it was on March 21.

Nashville, which previously served as the site of 2003 NHL Draft, is hosting the awards show for the first time.

The Nashville Predators will also host the 2023 NHL Draft at the Bridgestone Arena. This marks the first time that the two events will be conducted in the same city since both were held in Vancouver in 2006.

Free Agent Frenzy returns back to its normal date.

The New York Rangers will kickoff the 2022-23 preseason against the New York Islanders on Monday, September 26th at Madison Square Garden. Puck drop is scheduled for 7:00 PM ET.