The New York Rangers dusted off a lethargic performance against the Montreal Canadiens on Sunday with a nice bounce back win over the Columbus Blue Jackets.

Monday night was a complete role reversal for the Blueshirts, who actually built up a lead and played some defense for a 3-1 victory.

“It was good,” Gerard Gallant said. “The first two periods we were pretty dominant and I love the way we played. [Columbus] got that goal in the third period to put a little scare in you but we competed real hard and I like the win.”

The Rangers opened the scoring on a 4-on-4 situation 12:39 into the contest. Adam Fox moved the puck to Kaapo Kakko, who showed a world of patience waiting for Mika Zibanejad to come streaking through the zone. He hit him with a nice feed and the team’s top center used a screen to beat Elvis Merzlikins glove side.

With the goal, Zibanejad became the sixth Ranger in history to score 20 goals in 6 consecutive seasons.

New York increased their lead with a rare power play goal, their first in four games.

Once again, Kakko was playing the role of set up man getting the puck to K’Andre Miller at the point. He let a wrist shot fly that Barclay Goodrow tipped in front for his first ever career power play tally. Miller also extended his point streak to 7 games with the helper (3G – 6A).

The Rangers were doing a great job defensively not allowing the Blue Jackets to generate much holding them to just four shots in the first period.

In the middle frame, Vitali Kravtsov scored the easiest goal of his young career driving to the net converting a nice pass from Filip Chytil. It was his third of the year and first goal since December 18. Goodrow picked up the other assist.

“We talked in the locker room that we have to put the effort in this game and win the battles,” Kravtsov said. “Goody and Fil did all the work, I just put my stick on the ice.”

Jaroslav Halak was excellent in net only allowing a goal to Andrew Peek en route to a 24 save victory. This was his fourth straight win and fifth in his last six games after starting the season 0-5-1.

Although Columbus turned up the pressure, the Rangers held their own with a commitment to blocking shots to the very last second.

Despite the hiccup against the Habs, the Blueshirts are 15-4-3 in their last 22 games. They return home on Thursday to face the league-leading Boston Bruins.

Prior to the game, Chris Kreider (upper-body) participated in the optional morning skate. Head coach Gerard Gallant said he was very close to returning. 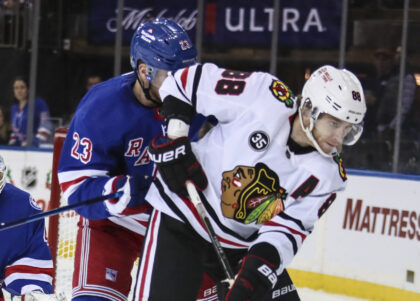