Don’t look now, but the New York Rangers pulled to within six points of the Carolina Hurricanes for first place in the Metro thanks to a solid 4-1 win over the Montreal Canadiens.

Things started off slowly for the Blueshirts on the road, but a second period penalty led to a Chris Kreider shorthanded goal and opened the floodgates.

“We played well. It was a first period where there wasn’t much going on,” Gerard Gallant said. “But Montreal came out there and had a really good period and they shut us down a lot and we couldn’t get going. There weren’t many shots in the first, but I thought in the second we started to get pucks to the net and things started to go our way a little bit.”

The Rangers head coach was complimentary of the Canadiens in the first period, but in truth his squad came out flat with little urgency. Fortunately, their opponent is one of the worst teams in the league and only mustered four shots to the Blueshirts six in the opening frame.

It wasn’t until the Rangers lackadaisical play earned them a too many men penalty. The Habs put some pressure on in the offensive zone and that finally shook them out of their stupor.

After a big Jaroslav Halak save, Kreider gathered puck with speed and scored a shorthanded breakaway goal by Jake Allen at the 7:43 mark of the middle frame.

The Rangers continued with the pressure and increased their lead thanks to a rising heater by Braden Schneider. Artemi Panarin and Vitali Kravtsov recorded the assists on the play.

Then just 59 seconds after that score, a determined Filip Chytil notched his first of two goals. After missing on a one-timer from the right side of the ice, he trekked to the opposite side to one-time a Ryan Lindgren shot by Allen. Jimmy Vesey notched the other helper in his first game after receiving a two-year extension.

Halak, who made 17 saves was beaten by Joel Armia with just over 5 minutes remaining to lose his shutout bid.

“At this point in my career it’s all about the wins,” Halak explained. “It would’ve been nice to have the shutout but I think 4-1, I’ll take it on any night… It’s a nice win for us to get two points in the standings because I’m pretty sure it’s going to be tight until the end of the season.”

“I’m happy for the goal and to help the team win the game,” Chytil said afterwards.

The Blueshirts will have a chance to move into second place when they face the Devils in New Jersey on Saturday. They currently sit one point behind their Hudson River rivals, who have lost 10 of their last 13 games (3-8-2)

“I think these last 15 games or so I think we found a new game and a new level that’s become the new standard,” Miller concluded. 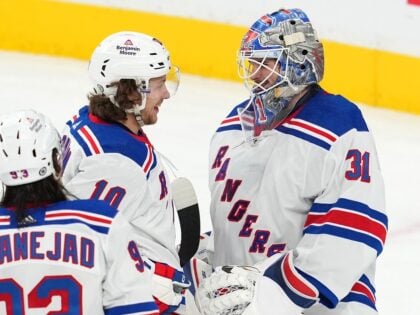